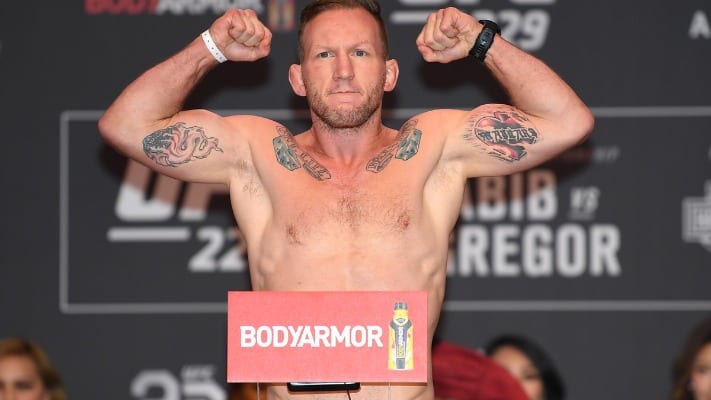 Former title challenger Gray Maynard discussed the ruthless business side of UFC amid the ongoing pay dispute. Jon Jones and Jorge Masvidal have led the charge against the UFC in recent weeks when it comes to fighter pay. Both fighters notably asked for their release from the promotion as they felt they were not being […]

Jon Jones and Jorge Masvidal have led the charge against the UFC in recent weeks when it comes to fighter pay. Both fighters notably asked for their release from the promotion as they felt they were not being paid what they’re worth.

Masvidal opened up another debate about the UFC’s pay system in general with the promotion reportedly only paying 16% of its revenues to fighters as per 2019 figures. In comparison to other leagues such as the NBA, the UFC is ripping off its fighters who are putting their livelihoods on the line each time they compete.

Maynard believes the UFC is getting away with murder as he revealed he only made $26,000 guaranteed for his lightweight title rematch against Frankie Edgar back in 2011 — with most of that money going into his camp and paying his coaches.

“Getting up to the title dude, I would be in the hole almost all of the time,” Maynard told The Body Lock. “Paying my coaches, paying for the best training, and then it just gets old where you’re like f*ck man, there’s just no getting ahead with this sport. There’s no payoff at the end.

“I walk to the cage with a pay-per-view main event guaranteed $26,000. If I would’ve lost that fight and had to pay $26,000 I would’ve had to pay to be in that fight. There’s a lot of crazy shit. That’s why I really feel like if you get a big name sticking up for the guys in the sport its gonna be a game-changer. The UFC got bought for 4.5 billion dollars, not because of how it great it is or whatever, it’s because there are no rules. They could get a guy to fight for $100 on a pay-per-view, they can get away with that.”

Maynard: Fighters Get Tipped Out

Jones recently tweeted how he felt like a fool thinking about all the money he missed out on and how the UFC made millions while appeasing him with cars.

That seems to be a common trend according to Maynard who compared fighters to strippers with how the UFC gives them bonuses which aren’t part of their contracts rather than guaranteed money they should already be earning.

The case in point being how the promotion handed Maynard a $100,000 bonus for his rematch with Edgar — something he considered “hush money” more than a bonus.

“That was kind of how it worked. We had a bad contract, but that we would get a little bit of money afterwards and it was like what is this, a tip? You can’t guarantee us this cash? It happens all across the world, it’s not just here. Promoters just get that power and all the guys just turn into numbers, they constantly think ‘how can we make the most off him.’ It’s the wild wild west man, the wild west. We don’t know the numbers and everybody’s just trying to get what they can get on a small portion and not looking at the big picture.”

Maynard did mention how a big name sticking out for other fighters could be a game-changer. Maybe Jones can be that big name.

What do you make of Maynard’s comments?