Bringing you the weird and wild from the world of MMA each and every weeknight! Welcome to Midnight Mania!
It’s easy to forget when watching Stipe Miocic win belts and set records … 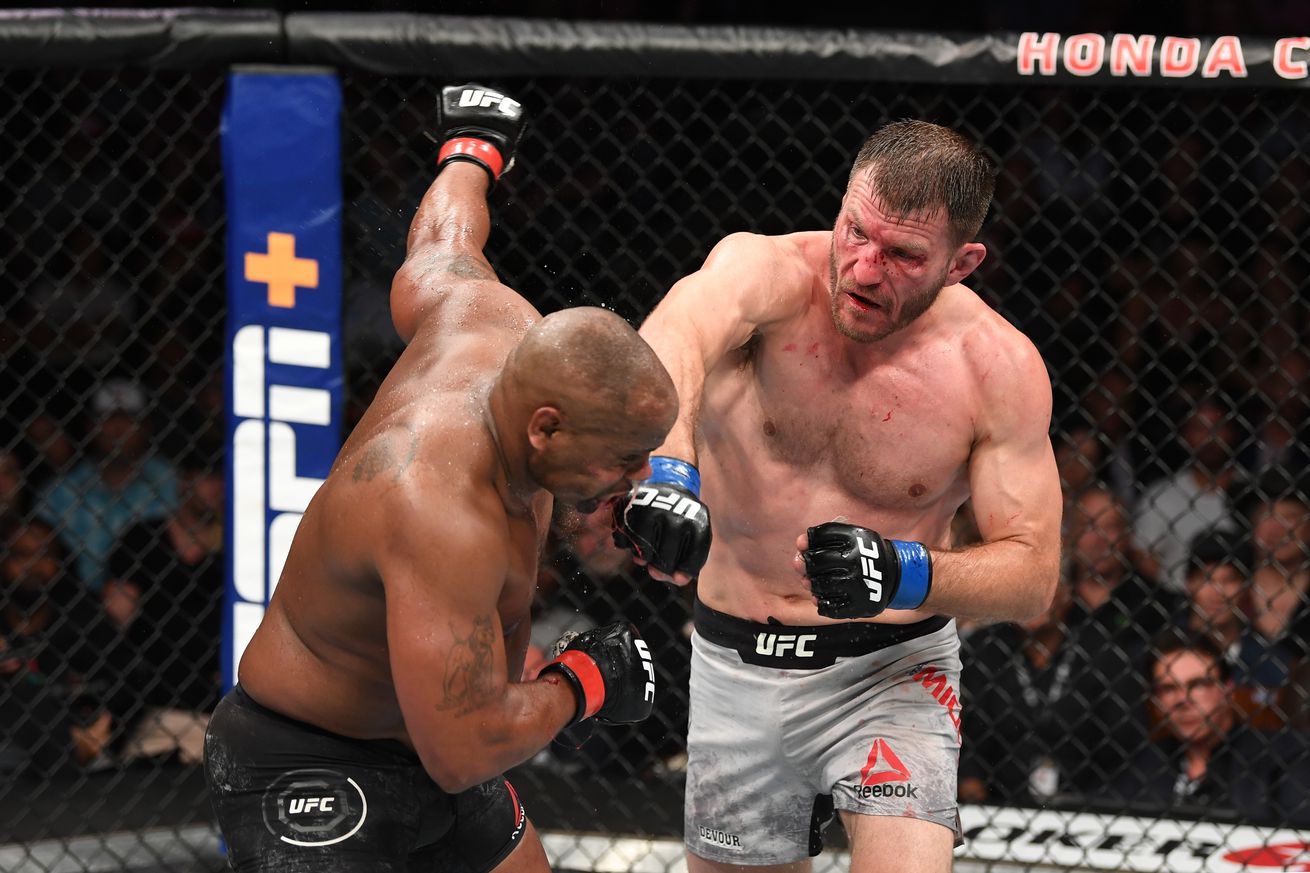 It’s easy to forget when watching Stipe Miocic win belts and set records at the highest level of competition, but fighting isn’t his only day job. The UFC Heavyweight kingpin is also an active firefighter-paramedic, which means Miocic is far closer to the front lines than most regarding the Coronavirus pandemic.

Speaking with Megan Olivi, Miocic explained that he was not confident his highly anticipated trilogy match with Daniel Cormier would be happening due to current circumstances. He explained (transcription via MMAFighting), “That way it’s looking now, it’s looking like summer, but I mean with this going on right now, honestly I’m not really worried about that. I’m worried about firefighting, and the paramedics out there and I got to do what I got to do. That’s my go to now.

There’s so many people out there that need help. Because people that are going to stay at home, and some of them, they’re going to get sick. Unfortunately, I’m putting myself in harm’s way, which I know what I signed up for, I’m OK with that. I just want to make sure I’m OK. When I come home at the end of the day, I want to make sure my family’s OK.”

To further explain his feelings, Miocic took to Twitter and confirmed that he was more concerned with helping in his own community than fighting.

I am focused on being a first responder. Not only did I take an oath, but I genuinely want to help those in immediate need. I hope we will all be fighting soon and back to our version of normal, but for now let’s make an impact in our communities. #SM https://t.co/APmRYyxm2X

It’s an incredibly admirable sentiment from the champion, even if it’s not one fight fans are likely excited about. Miocic recaptured the crown from Cormier back in August of 2019, which means that even without further delays, it could end up being over a year between title defenses for Miocic.

As a result, there could be talks of an interim title — Francis Ngannou is not going to wait forever — and Cormier could wind up stepping away from the sport before the trilogy concludes. Hopefully, the situation will unravel with a more positive outcome, but these are uncertain times at best.

I score this round 10-9 cat due to Octagon control and aggression.

Government : Everybody needs to work from home @ufc fighters : pic.twitter.com/QiRwaffNcm

Between condemnations from medical personnel and these two incidents, this week has not been a stellar week of publicity for UFC.

Ashlee Evans Smith: I’m gonna piss off all of MMA Twitter this week and be the talk of the town.

Edson Barboza is one of those tricky fighters who can make incredible opponents look pedestrian with the right style match up … or get hammered by a far less known foe.

An inside look at the process behind changing a fighter’s game — it will be interesting to see how Jessica Rose-Clark’s style develops in her next couple fights.

#CoachesCorner Rebuilding a Fighter from the ground up is a long term process not a short term fix. When @missjessyjess came to CSA the 1st thing I told her was that she was a World Class Athlete with World Champion Potential and ALOT of Bad Habits. I then told her she needed to fight at Bantamweight instead of Flyweight so she could stopping killing herself and to give her body / Metabolism a break from the drastic weight cuts that were zapping her and muting her power. Then we developed a plan to add muscle to her frame, create a solid base, add diversity to her striking arsenal, up her power output to her striking game and purpose to her movement. Since her last fight in Russia, these past 4/5 Months she’s turned a corner, no longer injured, she has done everything I’ve asked of her and more. She is an extremely dedicated student of the game and her strength and body have changed she’s bigger AND leaner then she was at Flyweight, the patented #PowerBelly has been replaced with a 6 Pack and her striking has improved 10 Fold. Next we will address offensive Wrestling improvements to get her back to her Grappling Game with this extra weight and explosiveness. These adjustments and changes need to be done in pieces and pragmatic steps. There is no quick fix or magic bullet. What I can say is that Jessy has bought in to the program and the results are evident!!! Proud of you girl!!! #HeartBreaker #CSAVSTheWorld

Now THIS is home training! It takes a good bit of practice to hold mitts this well.

Good job @_katestables knows how to hold pads Cos god knows what mental state id be in now….can’t wait Til my shins are better so I can boot her straight into next doors garden and teach her a lesson for not putting any ice in my lemonade earlier on….imagine how much my neighbours fuckin hate us. #gardenpads

Charles Oliveira’s bottom game is so fun to watch.

Ray Sefo put a different level of intensity into this right hand.

An old clip of Benny Urquidez bringing the pain:

The Man. The Myth. The Jet.

Manel Kape is a serious talent, and he locked onto this armbar with serious QUICKNESS!

RIZIN champ @ManelKape locks in an ultra-slick armbar submission on Daniel Barez from AFL 2. Plus some great officiating from @marcgoddard_uk. pic.twitter.com/b6lGBK4g3e

With everyone trapped indoors, Netflix’s fascinatingly bizarre Tiger Kingdom is sweeping the MMA web and regular Internet alike. Watch it!