Ultimate Fighting Championship (UFC) is bringing a bevy of “Prelims” fights to both UFC Fight Pass/ESPN+ and ESPN this weekend (Sat., Jan. 18, 2020) when UFC 246: “McGregor vs. Cowboy” storms T-Mobile Arena… 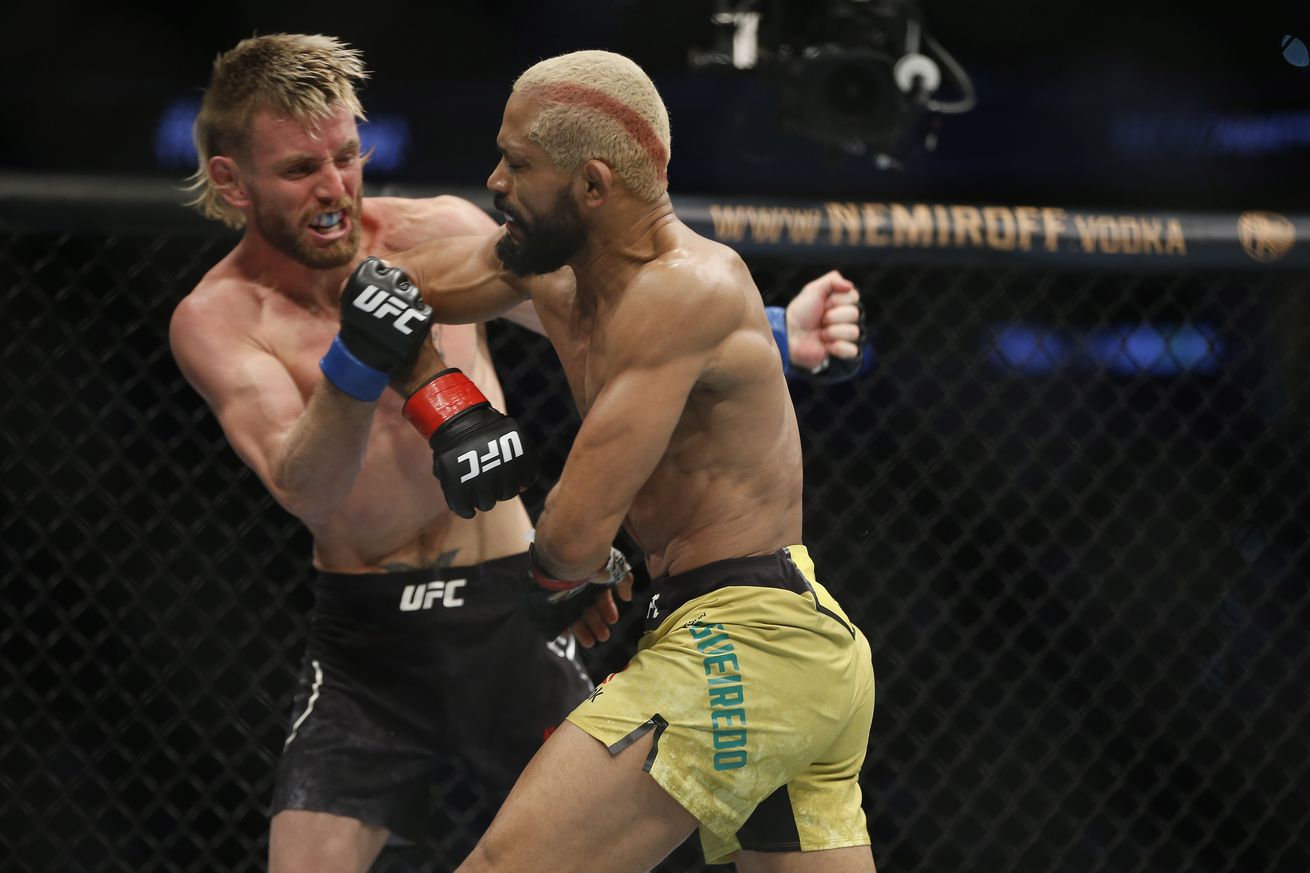 Ultimate Fighting Championship (UFC) is bringing a bevy of “Prelims” fights to both UFC Fight Pass/ESPN+ and ESPN this weekend (Sat., Jan. 18, 2020) when UFC 246: “McGregor vs. Cowboy” storms T-Mobile Arena in Las Vegas, Nevada. MMAmania.com’s Patrick Stumberg kicks off the UFC 246 “Prelims” party with the first installment of a two-part undercard preview series below.

Ultimate Fighting Championship (UFC) kicks off the new decade in the familiar halls of T-Mobile Arena in Las Vegas, Nevada, bringing with it a well-seasoned Welterweight grudge match. In the main event, Conor McGregor ends his self-imposed exile against the venerable “Cowboy” Cerrone, who looks to rebound from a destructive loss to Justin Gaethje. Down at 135 pounds, Holly Holm attempts to restart her climb through the ranks against Raquel Pennington, while Aleksei Oleinik squares off with Maurice Greene in evening’s sole Heavyweight tussle.

UFC 246 features eight “Prelims” undercard bouts this weekend, split evenly between ESPN+/Fight Pass and ESPN. Let’s see what the former have in store for us:

With a Golden Gloves background and the support of Stipe Miocic behind him, Aleksa Camur (5-0) entered his “Contender Series” bout with Fabio Cherant as a prohibitive favorite. Cherant managed to rock him early in the second round, only for Camur to come back with a flying knee for a contract-earning finish.

Three of his previous four knockouts came in the first round.

The past few years have not been kind to Justin Ledet (9-2), who wound up on the wrong end of a historically one-sided thrashing from Aleksandar Rakic to snap his three-fight Octagon win streak. He then had the misfortune of meeting a mid-rise Johnny Walker, who put away “El Blanco” with a spinning back fist in just 15 seconds.

This will be his first fight in 11 months because of injury.

The 24-year-old Camur looks the goods, but he isn’t a complete product quite yet, and Ledet could prove problematic for him. “El Blanco” has massive edges in height and reach, plus the jab to make full use of them. Unfortunately for Ledet, expecting him to fight to the best of his abilities is a bit of a pipe dream — he sleepwalked past far inferior opponents in Chase Sherman and Azunna Anyanwu, nearly losing the decision through inactivity against the latter. To make matters worse, Ledet just suffered his first-ever knockout loss, so there’s no telling where his head’s at.

Ledet at his best wins this pretty comfortably, keeping the shorter Camur on the end of his jab and neutralizing the latter’s explosive right hand. I’m done expecting Ledet’s best, though. Camur outworks a lackadaisical Ledet until a money shot hits home.

Tim Elliott (15-9-1) ran the table on The Ultimate Fighter (TUF) 24 to earn a crack at then-champ Demetrious Johnson, who survived an early rush to beat Elliott by decision. He’s alternated wins and losses since that defeat and was last seen tapping to Deiveson Figueiroa in the former’s first fight in nearly two years.

Though the taller of the two, he’ll give up one inch of reach.

Askar Askarov (10-0-1) dispatched Jose Maria Tome for the ACB Flyweight title in 2016, then defended it with submissions of Anthony Leone and Rasul Albaskhanov. A 16-month layoff followed, after which “Bullet” fought veteran Brandon Moreno to a draw in Mexico City.

He has never gone the distance in victory, submitting seven.

Get ready for some absolutely wild scrambles between these two. Elliott’s ground shenanigans are well-documented and Askarov — even if he was lucky to escape with a draw against Moreno — is smooth as hell in offbeat positions. I know predicting an exciting Elliott fight is like predicting that the sun will rise tomorrow, but trust me, he and Askarov will make something special (also something that probably won’t last too long).

Elliott’s been leaving his neck out in transition recently and that won’t fly against “The Bullet.” Askarov wraps up something unpleasant mid-scramble.

Brian Kelleher (19-10) followed his massive upset of Iuri Alcantara with wins in two of his next three appearances, one of which earned him “Fight of the Night” for his decision over Damian Stasiak. Things haven’t stayed quite as rosy, as he suffered stoppage losses to John Lineker and Montel Jackson his next two times out.

Injury makes this his first fight in nearly 13 months.

Three consecutive first-round finishes brought Ode Osbourne (8-2) to “Contender Series,” where he squared off with LFA veteran Armando Villareal in July. Despite ending up on his back because of a persistent takedown attack, Osbourne walked away with a contract after tapping his man with an armbar late in the first.

He has finished seven opponents as a professional, six of them in the first round.

Pitting a strong-looking prospect against someone reeling from consecutive losses generally indicates a showcase fight, but this is legitimately good matchmaking. Osbourne’s takedown defense and hands-low stance are his two biggest points of concern, and both of them could prove problematic in the face of Kelleher’s high-volume attack. Should Osbourne get too cheeky with his dynamic striking, Kelleher could very easily grind his way to an ugly victory.

Kelleher is, however, still coming off of two brutal losses and a lengthy layoff, and Osbourne has the goods to catch him before he can shake off the rust. Expect “The Jamaican Sensation” to get the early tap, either via club-and-sub or by punishing a takedown attempt.

Sabina Mazo’s (7-1) LFA title and history of head kick finishes brought her some hype when she joined UFC, only for Maryna Moroz to spoil her debut back in March. Undeterred, “Colombian Queen” returned to action five months later against TUF veteran Shana Dobson, whom she dominated to get back in the win column.

Both head kick wins came in the first round.

Losses to Tatiana Suarez on TUF and Juliana Lima in her Octagon debut didn’t stop J.J. Aldrich (8-3) from winning four of her next five in the Octagon, emerging as a contender in the process. Though she proved unable to halt the rise of Maycee Barber, she bounced back with a decision over Lauren Mueller.

She stands two inches shorter than Mazo at 5’5.”

Limited finishing ability aside, this is a good clash between sleeper contenders at 125 pounds, both of them highly adept kickboxers. Mazo showed what she was capable of against Dobson and Aldrich gave Barber a tougher fight than anyone to date. They’re both plenty young and rapidly improving, too, giving the matchup all sorts of intrigue.

I favor Mazo by a smidge. She’s the taller and rangier of the two, which will make it even more difficult for Aldrich to get past her jab and kicks, and has some ground chops to fall back on if things get hairy. “Colombian Queen” potshots her way to a close, but clear, victory.

Remember that MMAmania.com will deliver LIVE round-by-round, blow-by-blow coverage of the entire UFC 246 fight card this weekend RIGHT HERE, starting with the Fight Pass/ESPN+ “Prelims” matches online, which are scheduled to begin at 6 p.m. ET, then the remaining undercard balance on ESPN at 8 p.m. ET, before the PPV main card start time at 10 p.m. ET on ESPN+.

To check out the latest and greatest UFC 246: “McGregor vs. Cerrone” news and notes be sure to hit up our comprehensive event archive right here.