All the best, most interesting, and unquestionably coolest fights the UFC needs to book following their latest event in Moscow, Russia. After JDS dropped out of the main even, the fairest thing that could be said of UFC Moscow was, that it … 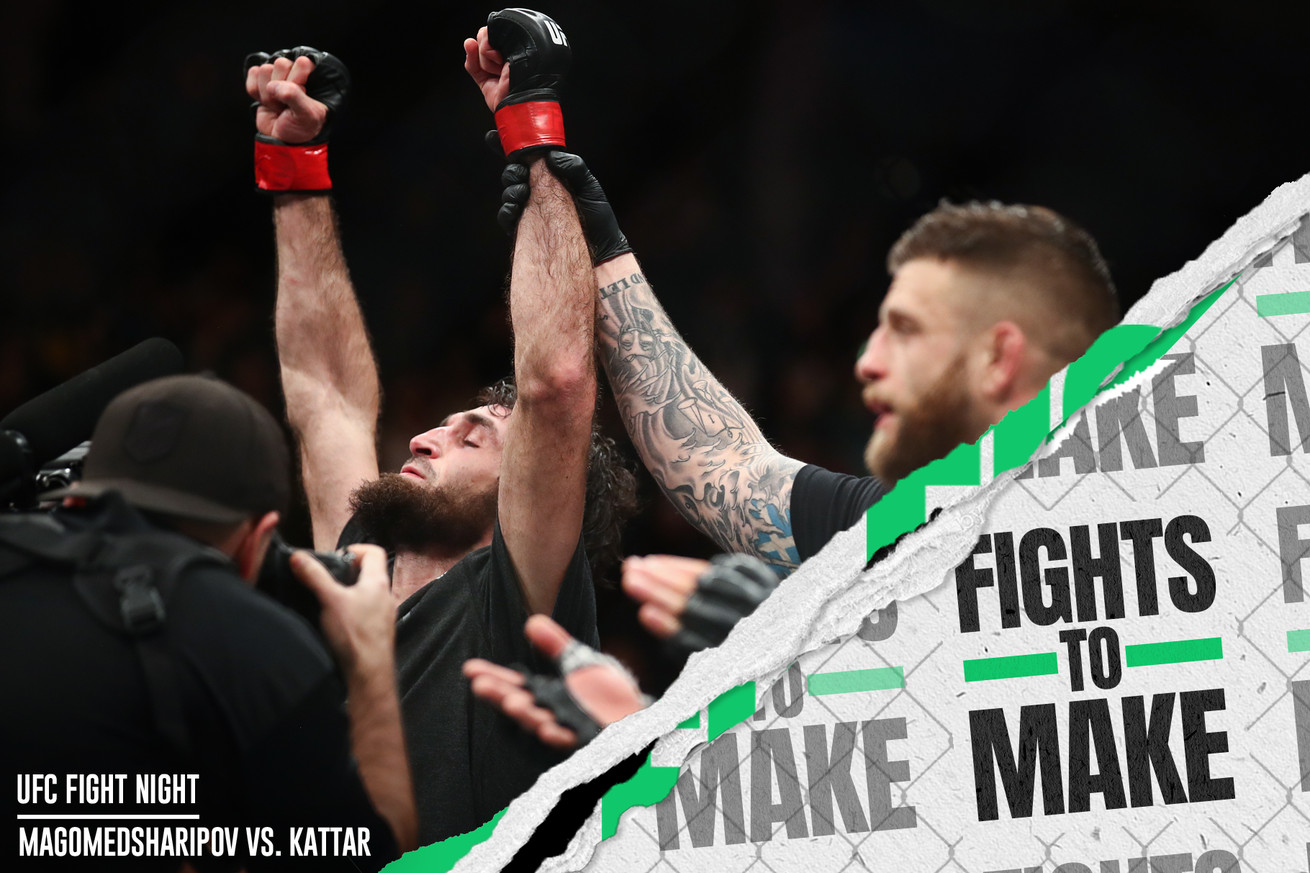 All the best, most interesting, and unquestionably coolest fights the UFC needs to book following their latest event in Moscow, Russia.

After JDS dropped out of the main even, the fairest thing that could be said of UFC Moscow was, that it could be a potential showcase for regional talent—and had a decently meaningful main event at the helm. In practice, that made for a card that most fans could pretty easily skip. A few highlight moments, a couple decent wars (including that main event), but largely a day that delivered neither high-octane action, nor meaningful results.

So, can the UFC really give Zabit a title shot after gassing in a three round fight again? And did Alexander Volkov make the right move by fighting for the win, and not the finish?

I’ll be answering those questions – and pretty much nothing else – using the classic Silva/Shelby fight booking style. That means pitting winners against winners, losers against losers, and similarly tenured talent up against one another. Keep an eye out for UFC on ESPN 7: Fights to make, where one lucky reader can win a chance to make their own picks for who they think fighters should take on next. And in the meantime, let’s get to the fights…

This is exactly the win Zabit needed to put himself in title contention, while at the same time being exactly the wrong way to get it. He’s undefeated in the UFC, 6-0, and seems like the de-facto top contender. But each of his three round decision wins has seen him struggle to maintain his cardio and composure late. And with no five round fights to his name, it seems somehow wrong to throw him into a title fight without proof he can take the fight the distance. If that’s still the route that the UFC wants to go, then I’ll absolutely show up to watch Magomedsharipov fight the winner of Holloway vs. Volkanovski. It’ll be an awesome battle as long as his cardio holds up. Instead, I’d much more strongly support booking him against the winner of TKZ vs. Ortega after their main event in Busan. However, with the distance between that card and now, and with Ortega already holding a definitive loss to Holloway, a much safer route would be to re-make the Yair Rodriguez bout as a Fight Night main event. Zabit Magomedsharipov vs. Yair Rodriguez; time for the UFC to re-book this firefight.

I’m sure losing won’t feel good for Kattar (at least the FOTN bonus is some consolation), but if he had to lose, this is about the best way for it to happen. Kattar couldn’t match Zabit’s variety and pace early, but as Zabit slowed and his timing improved, he really began to take over. By the end of the bout, it felt as though he’d have won it with even one more round to work with. But, he didn’t have it, and he knew he didn’t have it going in. So instead his title hopes will have to take a step back. Unfortunately, it’s hard to see exactly what that step should be. He could take on Josh Emmett, but I’d kind of like to see Emmett fight Burgos or Allen. He could fight Stephens, but Stephens is riding three straight losses right now. And a rematch against Moicano just doesn’t feel like a fight I have to see. End of the day, I guess I’ll say book Kattar against Josh Emmett, and maybe let Allen and Burgos battle it out. Calvin Kattar vs. Josh Emmett would be a ‘don’t blink’ war.

As much as many may have wanted to see Volkov really take Hardy to task, the Russian knew that there was more at stake for him than a chance to get a highlight. His KO loss to Derrick Lewis a year ago ground his title hopes to a halt. And after this fight was over Volkov admitted that his only real drive against a huge underdog opponent was to walk out of the cage with a win. He did that, if not a whole lot else. If he really wants to wait around for JDS’s leg to heal, then there’s no reason the UFC can’t make that fight again. Otherwise bouts with Curtis Blaydes and Francis Ngannou seem like the obvious options. Ngannou still feels like the dude who just doesn’t have anyone to fight right now. And a bout against Volkov’s diverse kicking game should make for a fascinating matchup. Alexander Volkov vs. Francis Ngannou seems like just about the only bout out there for the ‘Predator’ at the moment.

A huge and highly necessary win for Danny Roberts’ UFC future. After brutal losses to Claudio Silva and Michel Pereira, a loss to Imadaev seems like it could very well have seen ‘Hot Chocolate’ out the door. Instead he gets a crushing highlight KO, and gives everyone a reminder of what he’s capable of with his speed and well-rounded game. So it’s time to try taking another step forward in competition. There’s tons of depth at 170, no need for him to take on the newcomers. Bouts against Alex Morono, Lyman Good, or Belal Muhammad would all be solid. And I’d absolutely be down to see how he fares against someone like Muslim Salikhov (as brutal a matchup as that may be). Of those, I think the bout against Alex Morono would be the most interesting. Morono has been racking up wins with a style built on heart, aggression, and good gameplanning to compensate for a lack of natural athleticism. Roberts has the tools to compete everywhere, but Morono would push him constantly. Alex Morono vs. Danny Roberts is a great way to see if Roberts can rebuild his momentum.

Ibragimov fought the absolutely perfect fight for Herman beat him. Which is to say, he sat right in front of ‘Short Fuse’ and brawled it out—and did way, way too much clinch fighting. Herman may not be the fastest man at 205, or the most technically varied, but he’s got toughness, power, and a sneaky inside striking game. And even at 39-years-old he’s clearly got a lot of action battles left in the tank. If Lil’ Nog is going to fight again anytime soon, then that would be a pretty great bout right now. And it’s really too bad that Shogun is booked. Bouts with Ion Cutelaba or potentially Ryan Spann would also work just fine. But, as much as I would like to go winner/winner for him next, I think most of his best available fights are against fighters coming off a loss. Bouts against Michal Oleksiejczuk or Jim Crute would both be fantastic. As would Tyson Pedro. Of all those, I think Oleksiejczuk seems like the most sensible. So lets let Herman try and slam the door on another prospect. Ed Herman vs. Michal Oleksiejczuk should be a thriller.

Outside of a devastating momentary slip up against Paul Craig, Ankalaev has looked every bit like a future top 10 fighter in the light heavyweight division. And it’s time to start matching him that way. He’s just not going to get a lot out of fighting relative newcomers. Bouts against Misha Cirkunov or Ryan Spann would be decent ways to give him a step forward, but I think there’s a perfect bout to let the Dagestani see if he’s as ready for that next level as he thinks he is: Ovince St. Preux. OSP has made a career out of gate-keeping the elite against new rising talent. His combination of toughness, size, and power (as well as that funky grappling game) make him a fantastic challenge for fighters who need to measure all parts of their style. Magomed Ankalaev vs. Ovince St. Preux to see if Ankalaev is on his way to bigger things.

‘Baby K’ has been thrown into the deep end a couple times already in his young UFC career, and has a couple rough losses to show for it. But, through all that, he’s clearly a fighter developing the auxiliary tools to deliver a high powered MMA striking game at a high level. And that was on great display against newcomer Roman Kopylov. Roberson crushed Kopylov’s legs early and, after a terrible eye poke, took him down and choked him out to put a stamp on the whole thing. A performance that shows he’s clearly a step above the lower rungs of 185 and needs to be climbing toward the top 15. A bout against Marvin Vettori wouldn’t be a bad idea, but with Eryk Anders coming off a win, that seems like the best opportunity for Roberson to go out and get a name. Eryk Anders vs. Karl Roberson is a great bout for the edges of the top 15 at 185.

The UFC hasn’t been kind to Zawada early on. A hard-fought debut loss was chased by a punishing defeat at the hands of Li Jingliang. And with highly anticipated prospect Abubakar Nurmagomedov next on deck, it seemed likely he’d be 0-3 and on his way out after Saturday. But, despite getting instantly put on his back, Zawada showed his veteran craft and constant aggression to its best results with a quick triangle for the tap. A great win to keep a fun action fighter’s UFC career alive. With a go anywhere, fight anyone kind of style, the division is filled with good matchups for Zawada. Bouts against Sean Brady, Callan Potter, or Dwight Grant would all be solid. But, I especially like the idea of a matchup with Kenan Song. It seems likely to get a feature spot on a Chinese card, and make for a great platform for Zawada to show off his fan-friendly style. David Zawada vs. Kenan Song should deliver a scrap.