All the best, most interesting, and unquestionably coolest fights the UFC needs to book after their latest event in Las Vegas, NV. It was a good night for the UFC. On a card ravaged with the restrictions imp… 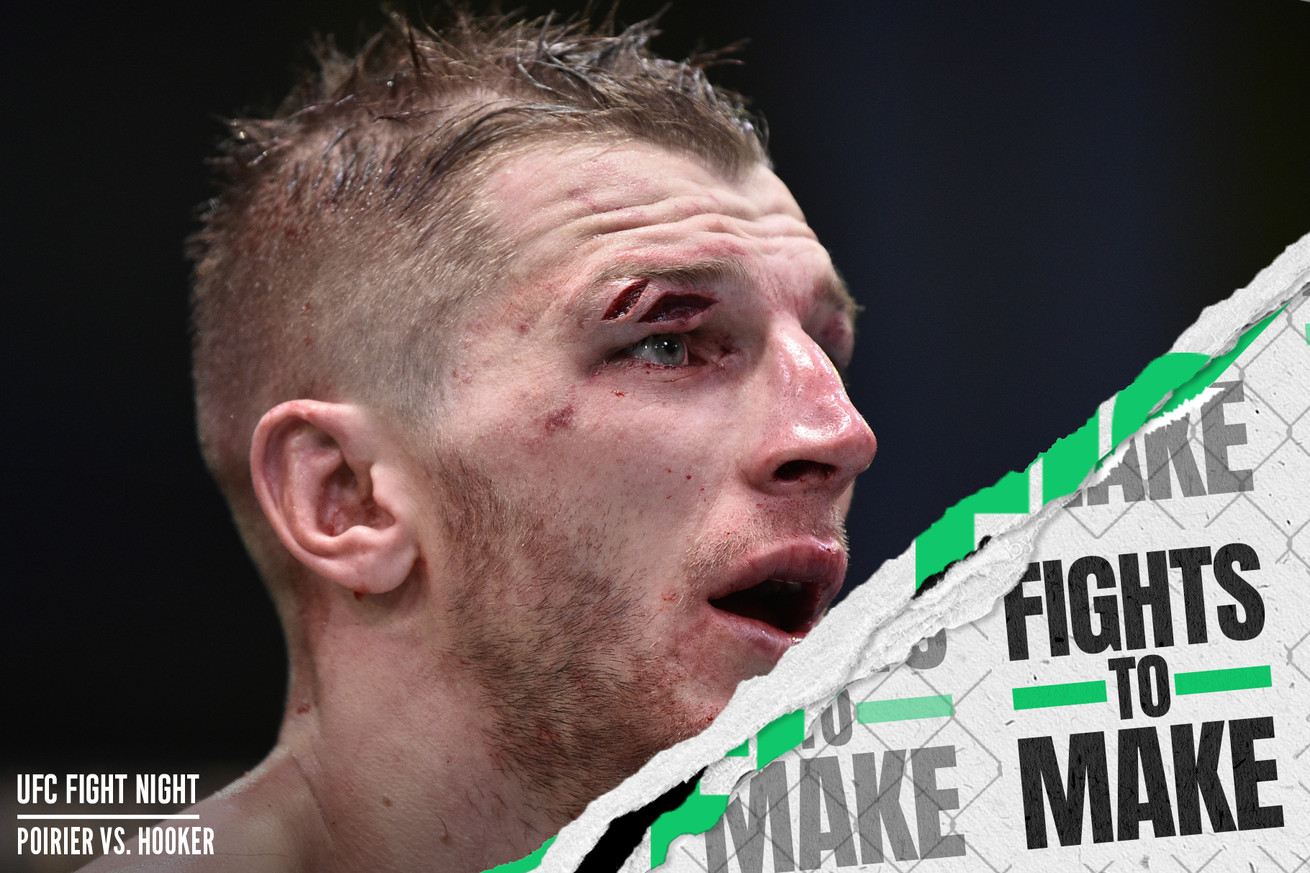 All the best, most interesting, and unquestionably coolest fights the UFC needs to book after their latest event in Las Vegas, NV.

It was a good night for the UFC. On a card ravaged with the restrictions imposed by the COVID-19 pandemic (a card that didn’t even start out looking all that strong, honestly) the UFC struck gold. Dan Hooker vs. Dustin Poirier was always going to thrill, but pulling wild, totally fight-altering third round submission finishes out of Maurice Greene, Julian Erosa, Khama Worthy, and Kay Hansen made for a memorable show from top to bottom.

So, does Dustin Poirier really want to wait until 2021 before he steps back in the cage? Is Mike Perry actually going to stick with only having his girlfriend in his corner? And how far can Brendan Allen go before he tastes defeat in the Octagon?

To answer those questions – but admittedly very little else – I’ll be using the classic Silva/Shelby fight booking methodology from the UFC of years past. That means pitting winners against winners, losers against losers, and similarly tenured talent up against one another. Hopefully, by following that model, a few of these bout ideas will actually make it off the page and into the Octagon. Now, let’s get to the fights.

What exactly shakes out next for Dustin Poirier is hard to know. Mostly because he doesn’t at all sound like a man who wants to jump right back into camp and prove something. The obvious bout to make is one between he and Tony Ferguson. But will their schedules line up if Poirier doesn’t want to fight again until early 2021? If Poirier wants to wait that long, who knows what opportunities may come up or get carried away. If Justin Gaethje beats Khabib and Khabib isn’t ready for an immediate rematch, the Poirier would unquestionably be the number 1 contender in that circumstance. Of course, there’s always Conor McGregor to contend with, as the division’s wildcard. End of the day, given what’s on the table, Dustin Poirier vs. Tony Ferguson is the the must see, must make fight of the moment. Whether or not that moment lasts remains to be seen.

Not the win Hooker had to be hoping for coming out of this fight, but he’s nonetheless proved himself as an absolutely elite action fighter and fantastic performer at the highest level, win or lose. This is the kind of defeat that should absolutely convince the UFC to keep Hooker headlining smaller cards against other scrappy lightweight opposition. Poirier pushed his pace to the limit and Hooker did everything he could to try and keep up. Against many many other fighters he would have walked out of Saturday with his hand raised. As a reward, bouts with Charles Oliveira, Tony Ferguson, or Carlos Diego Ferreria await. The Ferguson fight is clearly the grand prize of those, but there are probably fights (like that Poirier one) out there for ‘El Cucuy,’ that fans and the UFC are going to want to see first. At that point, Hooker vs. Oliveira would be an exceptionally fun fight. Two lanky former featherweights with increasingly dangerous games. One built around pressure, the other built around counters. Seems like a surefire thriller. Hooker vs. Oliveira is exactly the kind of action bout to keep Hooker headlining cards.

Honestly – even while it was a solid win for Perry – when push comes to shove, his standup striking looked more raw than it has in a long time. Gall more or less picked him off at will in the first round. And while Perry had him physically out-matched pretty clearly, he struggled to close the distance and find his power shots standing in almost every round. Eventually it was Perry’s top game that was really his saving grace. I’d love to see Perry take on someone like Claudio Silva, but the reality is that ‘Platinum’ is probably headed for something more high profile than the ultra-dangerous Brazilian dark horse. And while that could be Belal Muhammad or Neil Magny, neither idea really excites. There’s a really good ‘big’ fight out there for him, however. One that should be an absolute war and a test of his new found training: Anthony Pettis. ‘Showtime’ just picked up a win over Donald Cerrone, but doesn’t have any real clear next fight in front of him. A bout with a power-masher like Perry should be a fun chance for him to show his skill, and an opportunity for Perry to really test how far he can go under his own guidance. Perry vs. Pettis just feels like the right fight.

I don’t usually like to match up guys from the same card (and I’d honestly love to see Boser fight Chase Sherman), but the reality here is that both men seem to want this fight and have built in the kind of petty drama that won’t last that far into the future. If they’re both ready to go in the next couple months, then there’s no reason not to book Boser vs. Greene. The Canadian’s low kicking and volume should make him a favorite there, but Greene has had a tendency for sneaky subs (clearly) and has been tough as hell to put away, even when overwhelmed. Should make for a decent scrap, with some emotional backing to give it that little bit of extra punch. Greene vs. Boser is too sensible a fight for the UFC to not make it happen.

Allen’s rolled out to 3-0 in his UFC career, but after a couple strong upsets in his first two bouts, this was probably more of a wake-up call. Daukaus dialed Allen up in exchanges at range, competed with him on the mat, and generally made Allen pay for mistakes—even as Allen did the same to him, to better effect. After the fight, Allen called out Ian Heinisch, a bout I’d be happy to see whenever Heinisch is ready to go again. But instead, I’m gonna say Allen should take on Rodolfo Vieira. The BJJ champion is a beast on the mat, with a strong power-wrestling game. But like Allen, his standup is pretty raw. It’d be a great way to see if Allen can fight a more controlled fight, or whether he can actually dive into Vieira’s world with his usual reckless abandon and still come out on top. Brendan Allen vs. Rodolfo Vieira should be a fun grappling battle.

Two UFC fights, two savvy wins for Khama Worthy. While Worthy landing the big counter shot KO in his debut wasn’t much of a surprise, it was clear in most of his ground battles with Luis Pena that Pena was the better grappler. So it came as one hell of a surprise when Worthy forced Pena into a busted takedown attempt and then slapped on the power guillotine to tap him out. Worthy’s proving that he’s a fun addition to the lightweight roster in any situation. A fight against Brad Riddell would be one hell of a war for the ‘Deathstar,’ but the UFC likely has bigger things tabbed for the Aussie. Instead, how about a fight against Thiago Moises. Mosies got a fantastic upset win over Michael Johnson. Let’s see if he can survive the onslaught of another fast handed striker. Worthy vs. Moises should be a quality next bout.

For a fighter who’s only just about to turn 21, Hansen already has a surprising amount of MMA experience. And her win over Frey is definitely a strong step forward—undeniably her best victory to date. It could also be the kind of win that gets her pretty quickly thrown into deeper water. The best way to mitigate that, to my mind, is a match-up with one of the division’s many strong grapplers. Someone who won’t pose the kind of high volume striking threat that I’m just not sure Hansen is equipped to deal with yet—at least not if she can’t get the fight on the mat. The upcoming bout between Ashley Yoder and Livinha Souza seems like an excellent opportunity to provide a winning opponent with a ground game to really force Hansen to show her skills. Hansen vs. the Yoder/Souza winner should be all scrambles all the time.