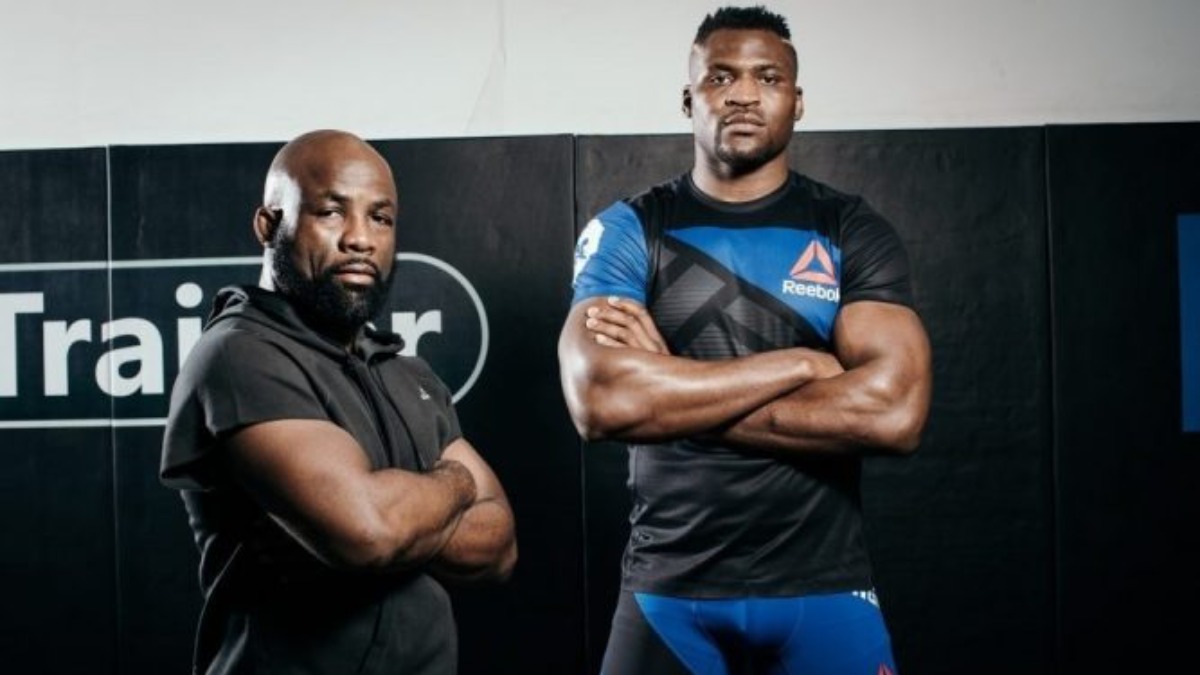 MMA Factory head coach Fernand Lopez isn’t happy with his former protege, Francis Ngannou, calling him “evil and manipulative” after sparring footage with Ciryl Gane went viral. Ngannou and Gane are set to square off for the unified UFC heavyweight title at UFC 270, the first pay-per-view of the new year. The two elite strikers […]

Ngannou and Gane are set to square off for the unified UFC heavyweight title at UFC 270, the first pay-per-view of the new year. The two elite strikers were once teammates at MMA Factory before Ngannou was kicked from the gym after a falling out with Lopez.

The two sides have gone back-and-forth on their relationship at MMA Factory before Ngannou ultimately joined Xtreme Couture in Las Vegas. Both have accused the other of various misdoings. Lopez claims that Ngannou tried to stop the UFC from signing Ciryl Gane. ‘The Predator’ has since denied trying to stand in the way of Gane signing for MMA’s premier promotion.

During an exclusive interview with LowKickMMA, Lopez responded to Ngannou’s recent comments on his YouTube page.

“If Francis denied that he didn’t try to prevent the UFC from Ciryl, he’s a fucking liar,” Lopez said. “Francis Ngannou told me ‘coach… I had a meeting with Mick’. And he asked me, is it true that Ciryl is ready for the UFC? And I said to him, he’s a good young kid, he’ll be good one day. But I told him he’s not ready yet.’ If he says this isn’t true, then he’s a f**king liar.

“I’m not surprised that he said that, because I don’t think Francis Ngannou ever thought that Ciryl was the kind of guy to face him one day,” Lopez added. “He basically pretended that Ciryl was irrelevant, always talked him down. That’s who he is, I’m giving you guys the reality. I took him from the street, helped him stay in the gym without paying any fee, gave him money and sponsors, and a place to sleep.

“And I’m evil? How am I evil when I’m the one who called Joe Silva when you were 4-1 and got you in the UFC? I told him he could become a champion. He’s full of s**t. Francis Ngannou is full of s**t and has a victim mentality.”

The Lopez/Ngannou tensions have been a key component to the buildup ahead of UFC 270. While Ngannou and Gane don’t appear to have legitimate animosity for one another, it’s clear that he doesn’t care for his former coach.

The UFC heavyweight title fight will be the main focus of Fight Week, but the back-and-forth between Ngannou and Lopez will almost certainly be a topic of discussion for weeks to come.

What is your reaction to Fernand Lopez‘s comments?

Coach Fernand Lopez has revealed he kicked UFC Heavyweight Champion Francis Ngannou out of the MMA Factory gym after “The Predator” refused to pay the membership fee.

Tensions between Ngannou and his former team appear to be as high as ever. Under …

Coach Fernand Lopez has revealed he kicked UFC Heavyweight Champion Francis Ngannou out of the MMA Factory gym after “The Predator” refused to pay the membership fee.

Tensions between Ngannou and his former team appear to be as high as ever. Under the tutelage of Lopez in Paris, the Cameroonian was able to transition from poverty to a global status as one of the best heavyweights in mixed martial arts. After going 5-1, largely fighting in regional French promotions, Ngannou was signed by the UFC in 2016. After six fights and six finishes, including a brutal knockout against perennial contender Alistair Overeem, he fought for gold for the first time.

Having fallen to consecutive defeats against Stipe Miocic and Derrick Lewis, Ngannou eventually left MMA Factory and made a second run for the title with Xtreme Couture’s Eric Nicksick at the helm. After tearing through the division, “The Predator” exacted revenge on Miocic at UFC 260 this year, and had UFC gold wrapped around his waist for the first time.

Meanwhile, a new star was emerging out of Lopez’s famed French gym. After transitioning to MMA from Muay Thai in 2018, Ciryl Gane rapidly rose up the UFC ladder, winning the interim title in August after just two years in the promotion. In doing so, he’s set up a blockbuster unification bout with former teammate Ngannou.

Despite still being months out from the clash, the stage was set with a viral video that came out of UFC 268 last weekend. A backstage clip shows Ngannou walking past his former coach and teammates backstage inside Madison Square Garden. The champ proceeded past Lopez, Gane, and Nassourdine Imavov without so much as a glance their way.

Lopez Reveals When The Cracks Started To Appear

After Ciryl Gane expressed his confusion over the backstage snub, Fernand Lopez has also now addressed the awkward encounter. During an appearance on Ariel Helwani’s The MMA Hour, the 42-year-old revealed he wasn’t surprised by his compatriot’s decision to avoid an interaction with him, especially given the words they’ve both said in interviews.

Lopez was also asked where things started to go wrong in his relationship with the heavyweight champ. Remarkably, the founder of France’s biggest MMA gym claimed Ngannou refused to pay for a gym membership when he began to earn substantial money in the UFC. That’s despite the coach allowing a poor and struggling Ngannou to train for free for four years at the start of his career. According to “The Predator,” the fact he was bringing attention to the gym meant he should have been exempt from paying a fee.

“During the time that we live together, I asked him to step out of the gym twice. Myself asked Francis,” Lopez said. “Okay, when Francis fought against Anthony Hamilton, that fight, I choose to not go. I said to him, ‘I’m not coaching you anymore, I need you to step out of the gym.’ Because Francis said to me, ‘There’s a guy who is calling to get money in the gym from fighters, membership.’ And Francis said to me, ‘I’m the one bringing the (spot)light in the gym. I shall not pay any membership.’ And I said, ‘This is crazy.’ I mean, you must be crazy. You spent four years on your life, for free in my gym. I never asked you for anything, any penny. And now that you’re not poor anymore, and I keep bringing poor guy in my gym, there’s around 40 guy homeless in my gym, poor people that I’m taking care of them. I call that ‘file zero.’ When a guy shows up in my gym, I send him to my secretary and I say, ‘Give him file zero.’ Means take him to the gym for free.

“And I said,’ Okay, you become a successful man, you have money, you pay me 10 percent. On top of the 10 percent, you ask me to pay the sparring partner with that money that you give me. On top of that, you’re saying that that will be shame to know that a big man like you is paying the membership.’ You know how much is the membership in a year in my gym? €600. €600 per year, one year,” added Fernand Lopez. “And he said, ‘No, I will not pay.’ So, I said, ‘You know what, you don’t listen to me anymore when I’m giving the class, you choose the easy way to train, please let’s just split.’ And he did.”

With perhaps a more personal rivalry now, Gane and Ngannou will settle their scores in the main event of UFC 270. The event, which is set to take place on January 22, will be the opening pay-per-view of 2022.

Who do you think will leave UFC 270 with the undisputed heavyweight gold, MMA Factory’s Ciryl Gane or the gym’s former member Francis Ngannou?

The head coach of Ciryl Gane, who also happens to be Francis Ngannou’s former mentor, has revealed his initial problems with “The Predator.” Francis Ngannou was once a part of the MMA Factory in France. There, Ngannou trained with Gan…

The head coach of Ciryl Gane, who also happens to be Francis Ngannou’s former mentor, has revealed his initial problems with “The Predator.” Francis Ngannou was once a part of the MMA Factory in France. There, Ngannou trained with Gane among others. Ngannou ended up leaving MMA Factory after suffering a unanimous decision loss to […]