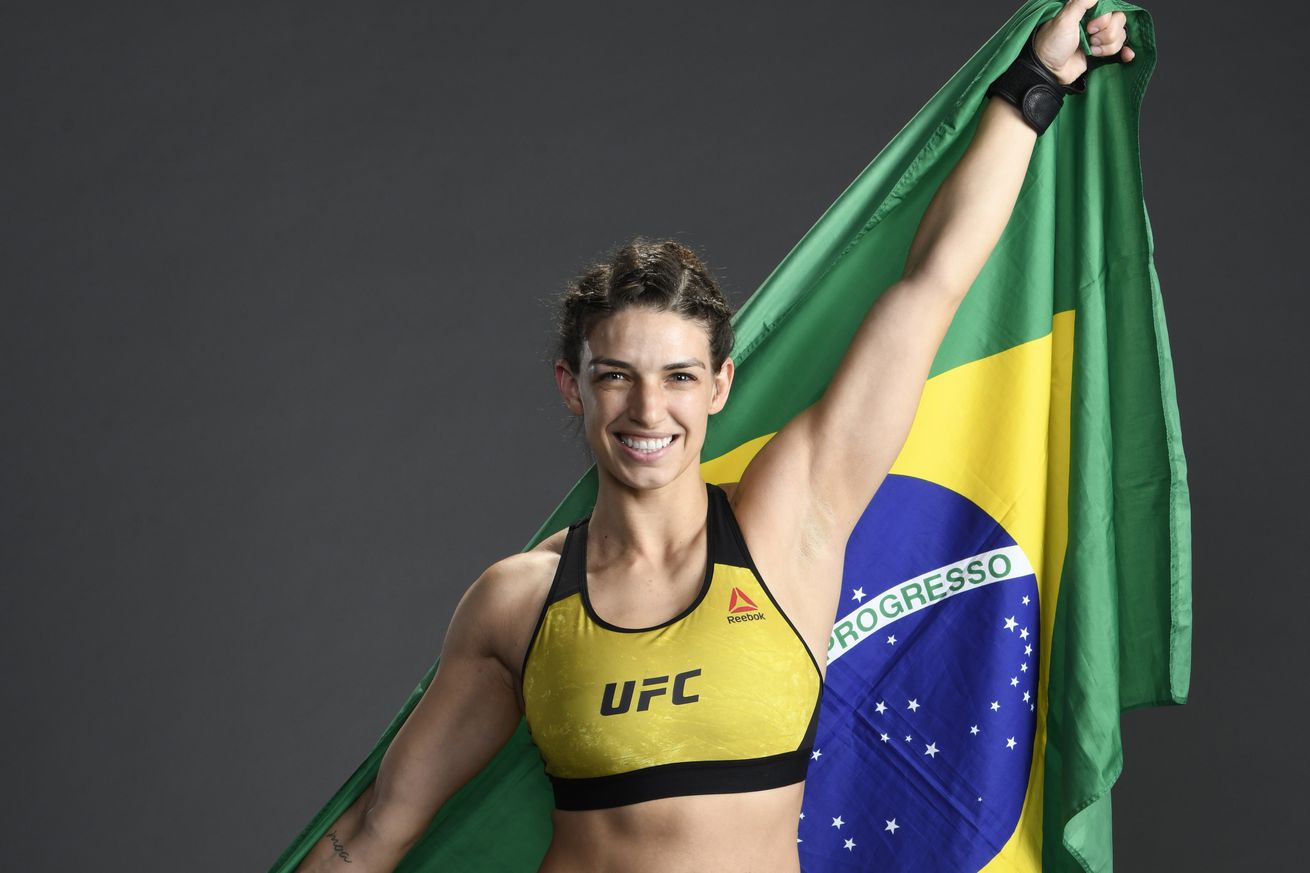 In order to sift through the action and see which fighters took home an extra $50,000, we take a closer look at the official UFC on ESPN 9 bonus winners below:

Fight of the Night: Brandon Royval vs. Tim Elliott

Performance of the Night: Gilbert Burns

Performance of the Night: Mackenzie Dern 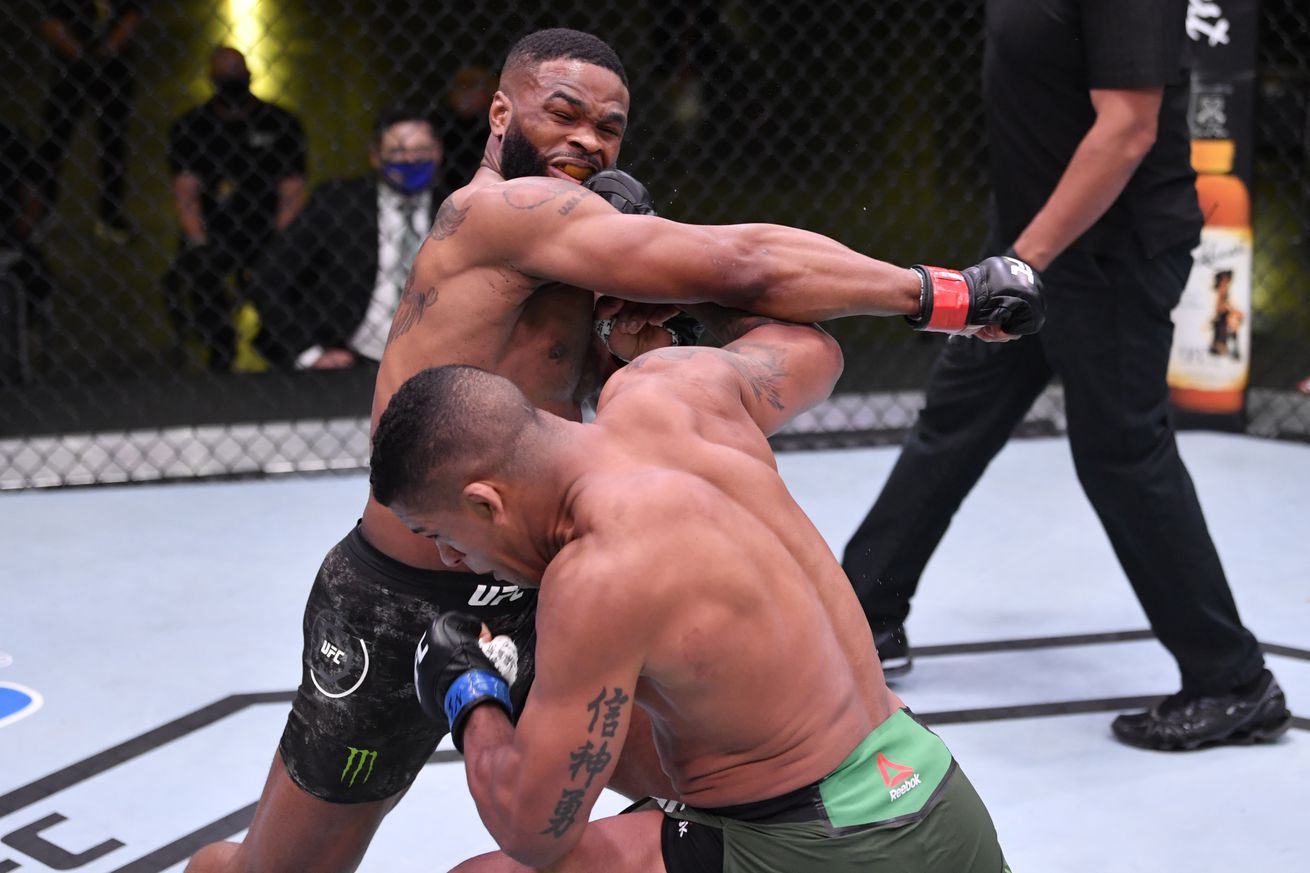 Gilbert Burns dominated former UFC welterweight champion Tyron Woodley at every turn of their main event clash last night (Sat., May 30, 2020) live on ESPN/ESPN+ from inside UFC APEX facility in Las Vegas, Nevada, capturing a lopsided unanimous decision and the biggest win of his professional career.

Burns cracked Woodley early during a powerful exchange and knocked him to the canvas. Woodley survived but got opened up with a bad cut above his left eye. Burns would find full mount and score valuable top control, but not much damage was inflicted. Woodley would eventually explode to his feet. Burns ended up connecting with a crisp left hook before the end of the round.

Woodley started to feint in Round 2 and found some success with his hands. Burns kept the pressure building and ended up scoring a takedown on “Chosen One,” which rarely happens inside of the Octagon. Woodley once again powered his way to his feet only to have Burns slam two quick punches into his face.

The action slowed to start the third until Woodley landed a crisp straight right. Burns remained in control and welcomed the former UFC champion to the center of the cage. Burns kept trying to land a big right hand but Woodley’s movement and head work looked good. However, Burns did land sharp leg kicks that seemed to hurt “Chosen One.” Burns starred down Woodley after the round ended.

The fourth round saw a desperate Woodley get a little more active with combinations and short punches to the body before Burns tied the action up along the cage. Once separated, Burns unloaded combinations that snapped Woodley’s head back and left him even more confused. Burns then exploded for a powerful string of punches that rocked Woodley and dropped him to one knee. “Durinho” would gain top control and ride out the rest of the round.

In the fifth and final round, Woodley started to swing for the fences but Burns was there to check him with another hard leg kick. Burns then went back to his clinch game to keep Woodley trapped along the cage. “Chosen One” dug deep and attempted to land a fight-changing attack, but Burns left him little room, pressing the action and scoring more offense at every turn.

In the end, Burns shined over all five rounds and walked away the impressive unanimous decision win.

Check out the full fight video highlights below courtesy of UFC/ESPN:

The return of @TWooodley #UFCVegas pic.twitter.com/ASNCG4iST4

Ready to jump back into the title picture! @TWooodley #UFCVegas pic.twitter.com/xkTRWnaK1C

There’s a massive cut over the left eye of Tyron Woodley #UFCVegas pic.twitter.com/fwoSlTHF4o

This cut on Woodley tho? #UFCVegas pic.twitter.com/kY3IypEmyF

@GilbertDurinho with a flurry of strikes in RD 4! #UFCVegas pic.twitter.com/qBfeAtePL7

Click HERE for official UFC on ESPN 9 results!!! As soon as UFC on ESPN 9 wraps up later tonight (Sat., May 30, 2020) live on ESPN/ESPN+ from inside UFC APEX facility in Las Veg… 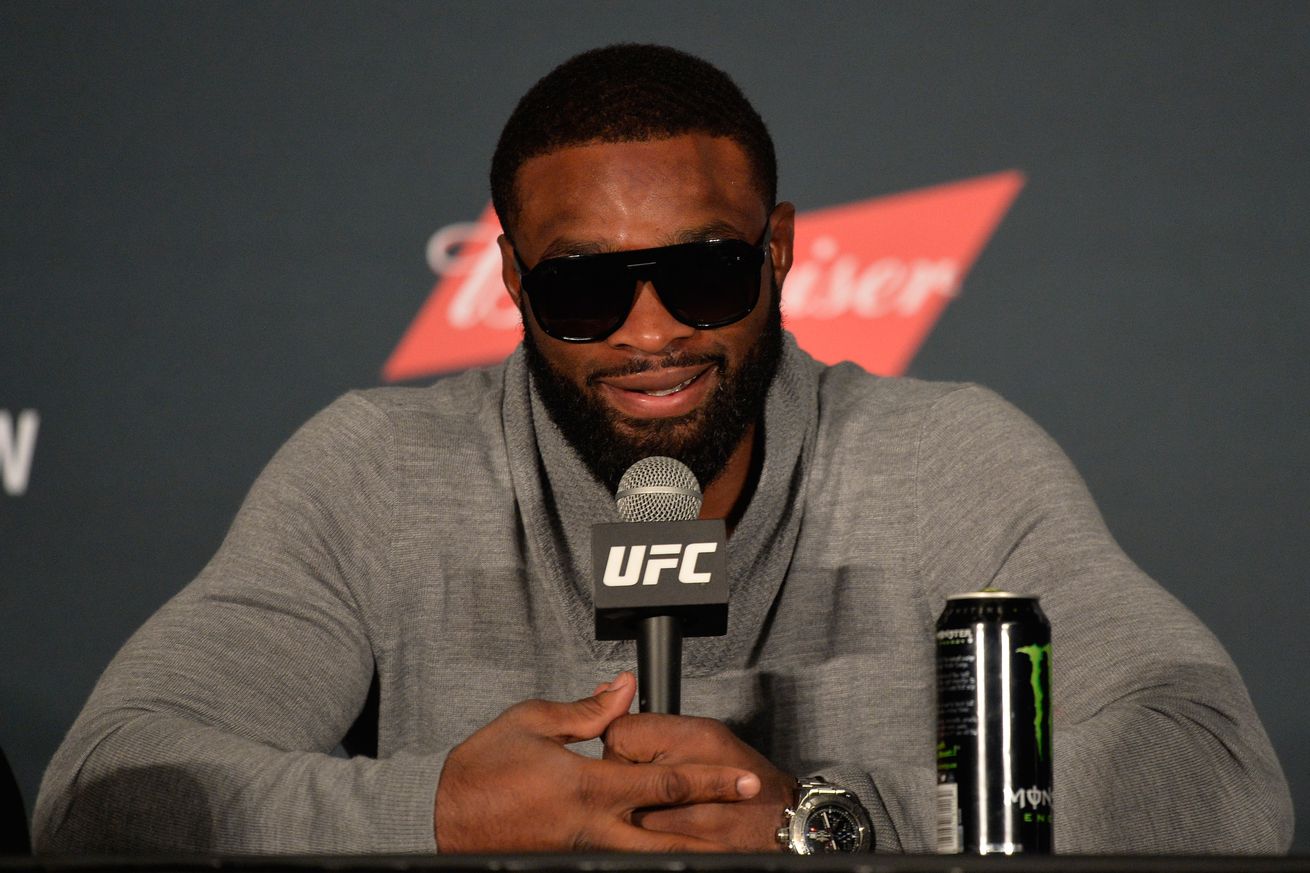 As soon as UFC on ESPN 9 wraps up later tonight (Sat., May 30, 2020) live on ESPN/ESPN+ from inside UFC APEX facility in Las Vegas, Nevada, fight fans can check out the live post-fight press conference video above for all the best reaction and official bonus winners.

On a night that features a main event clash pitting former UFC welterweight champion Tyron Woodley against surging finisher Gilbert Burns, a co-headliner showcasing rising heavyweight prospect Augusto Sakai against veteran Blagoy Ivanov, and the Octagon return of women’s strawweight contender Mackenzie Dern as she takes on hard-nosed division staple Hannah Cifers, there will be much to talk about when the action winds down.

The post-fight presser is scheduled to go live at 12:15 a.m. ET (Sunday), and feature the biggest winners and losers from the card. 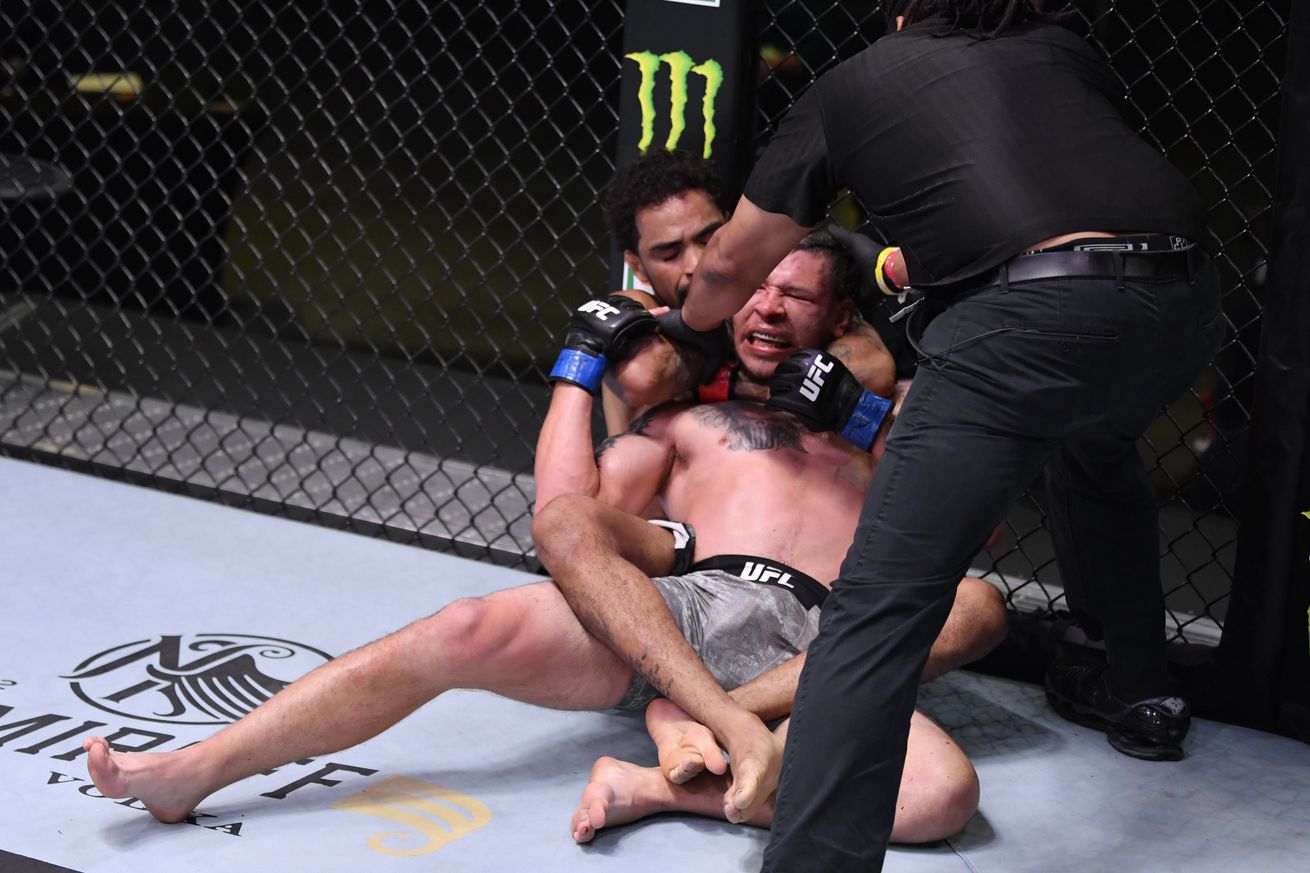 Roberts commanded this catchweight affair from the opening bell. Weaver was able to push “Predator” against the cage, but Roberts scored punches at will, threatened with his own grappling, and took control at every turn. In the second, Roberts was able to work his offense along the cage and gain back control. That’s when he sunk in the rear-naked choke and forced the tap.

The finish can be seen above courtesy of UFC/ESPN.

With this performance, Roberts improves his UFC record to 4-1 and showcases yet again that he implements a full package whenever he steps inside of the cage. Roberts is one of the best up-and-coming names in the UFC’s stacked lightweight division and should start seeing bigger and better opponents moving forward. 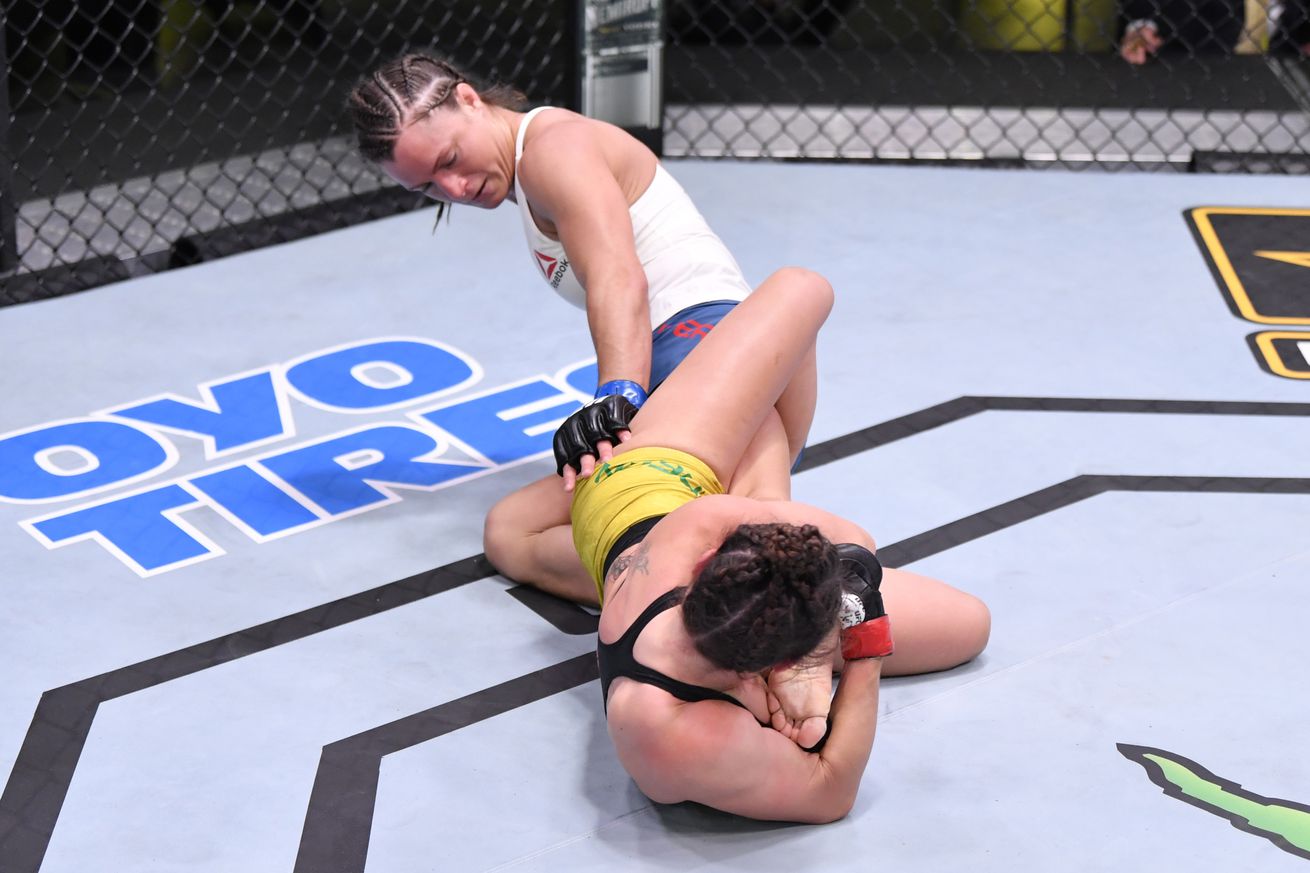 Mackenzie Dern returned in dramatic fashion earlier tonight (Sat., May 30, 2020) live on ESPN/ESPN+ from inside UFC APEX facility in Las Vegas, Nevada, to end battle-tested veteran Hannah Cifers via first-round submission (kneebar). It was the first kneebar finish in the history of any UFC women’s division.

Dern had some early trouble with Cifers’ pressure and combinations, but eventually scored a takedown. Cifers was quick to get back to her feet but Dern was able to grab a hold of her leg. The Brazilian submission specialist applied pressure and Cifers fell to the ground. That’s when Dern extended the knee and forced the tap.

Check out the rare women’s finish above courtesy of UFC/ESPN.

With this performance, Dern makes a big return to the Octagon and gets back into the 115-pound win column after losing a tough decision to rising contender Amanda Ribas back in October. Dern remains one of the most promising names on the UFC roster and should find her way back into the cage by year’s end, which could lead her closer to title contention.

Jamahal Hill kept his undefeated record in tact earlier tonight (Sat., May 30, 2020) live on ESPN/ESPN+ from inside UFC APEX facility in Las Vegas, Nevada, when he flattened Klidson Abreu via first-round TK… 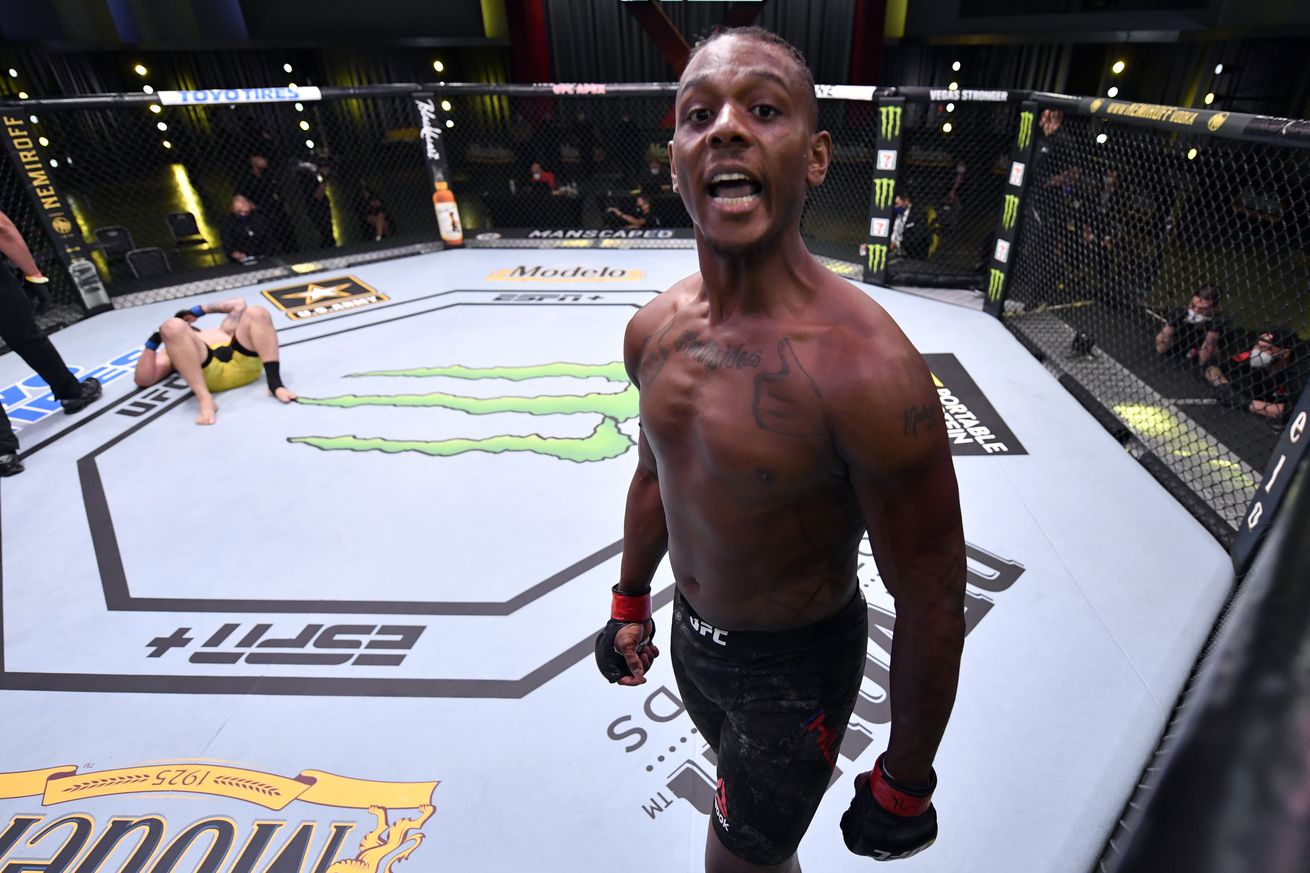 Jamahal Hill kept his undefeated record in tact earlier tonight (Sat., May 30, 2020) live on ESPN/ESPN+ from inside UFC APEX facility in Las Vegas, Nevada, when he flattened Klidson Abreu via first-round TKO (knee to the body and punches).

Hill had Abreu’s number from the opening bell as he connected with a straight left, right hook that scored a knockdown. Abreu would regain his composure only to have Hill land a brutal knee to the body. The Brazilian fell to the canvas and Hill followed up for some punches before the referee stepped in.

The finishing sequence can be seen above courtesy of UFC/ESPN.

With this performance, Hill pushes his undefeated record to 8-0 and captures his second win in a row inside of the Octagon. “Sweet Dreams” looked tremendous tonight and is quickly proving to be one of the most promising prospects at the light heavyweight level.