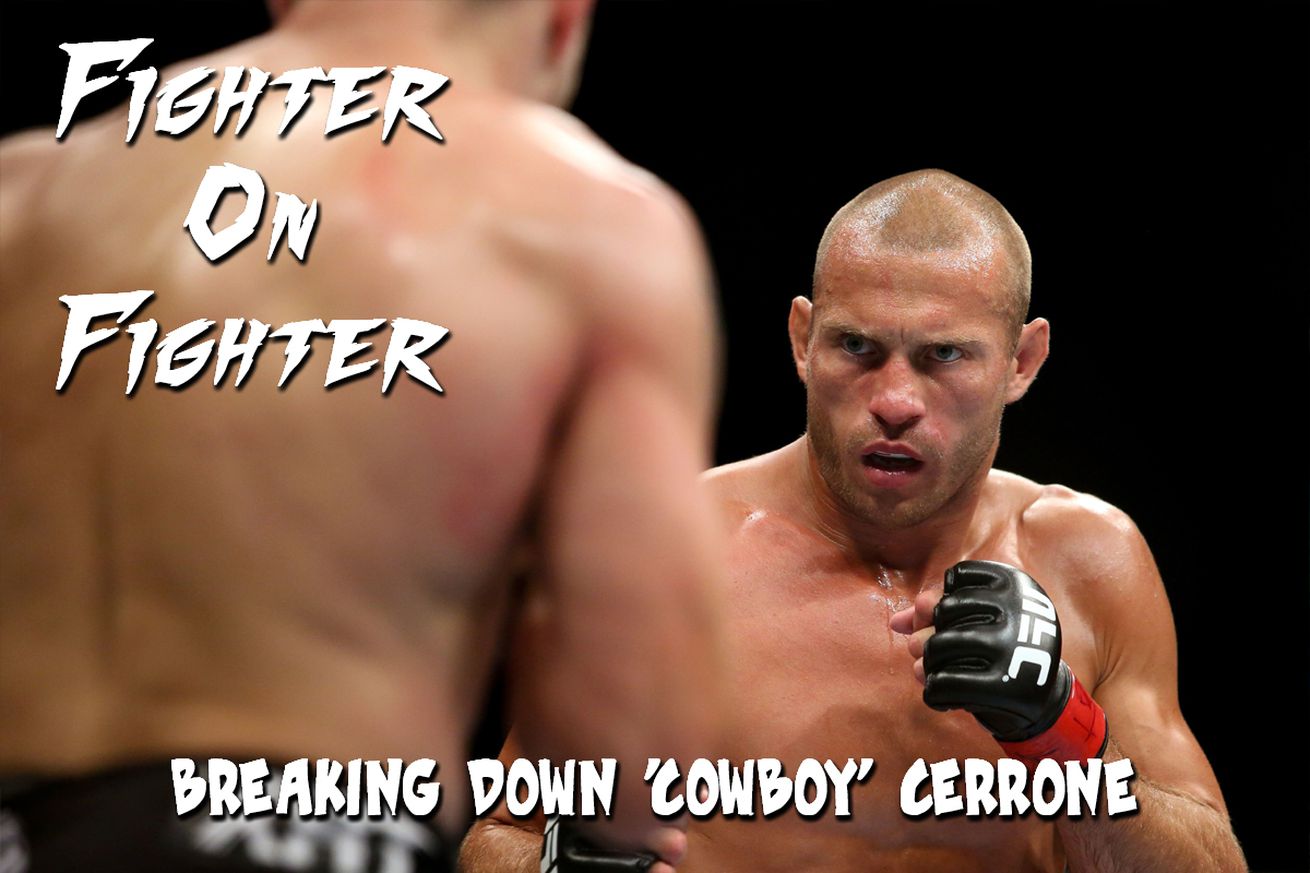 “Cowboy” is the king of keeping on.

Cerrone has lost a dozen times in professional bouts, with a majority of those defeats coming in title or top contender bouts. The careers of most fighters don’t survive more than a couple losses like that, yet Cerrone dusts himself off and jumps right back on the proverbial (or in his case, literal) horse. Take Cerrone’s last bout for instance, a brutal doctor’s stoppage loss to Tony Ferguson (watch it). Cerrone’s eye swelled completely shut and he barely got off any offense, but “Cowboy” still requested an immediate rematch! When that request was denied, Cerrone quickly signed the dotted line to face one of his division’s scariest contenders. Cerrone just doesn’t stay down, and it’s admirable if nothing else.

Let’s take a closer look at the veteran’s skill set:

When Cerrone is able to land kicks, there are few fighters on this planet nastier than “Cowboy.” If Cerrone is landing at all, he’s going to build from that point until he’s completely dominating.

Range is a huge factor in just about every fight, but it’s vital for Cerrone. He’s never fared well in the boxing range, tending to end up standing a bit tall and punching with wide elbows. Still, Cerrone did improve his hands a bit with his move to 170 pounds, which was most noticeable in his victory over Patrick Cote. In that bout, Cerrone kept his composure when pressured, and the result was a few violent — if slightly awkward — left hooks that eventually ended the bout (GIF).

Opposite the relentless forward combinations of Yancy Medeiros, Cerrone did a pretty nice job of angling and pivoting off past the lead leg of his opponent. Medeiros is so forward in his attack that he proved the perfect target, and Cerrone was able to drop his opponent with a counter cross after angling a couple of times (GIF).

Still, the pocket is not where Cerrone wants to be.

Somewhere around 2014, Cerrone made the most important improvements of his entire career by adding intercepting strikes to his attack. It’s a testament to Cerrone’s longevity that he’s had a great career before and after this development. In this week’s technique highlight, we cover the intercepting knee and some of the follow ups Cerrone uses after landing the strike.

Both of these strikes serve the same purpose — prevent Cerrone from ending up in boxing exchanges with his opponent. In addition, both strikes are particularly painful and eat away at his opponent’s conditioning, meaning that trying to close the distance on “Cowboy” quickly becomes a miserable task.

Cerrone’s combinations are excellent when he’s allowed to initiate. For example, check out his gorgeous high kick knockout of Rick Story (GIF). The violence starts with a counter jab that blinds his opponent, setting up a stiff cross to the mid-section. The body shot crumbles Story a bit, leaving him very open to the uppercut, which pops him right back up into the direction of a high kick.

Cerrone can kick with power at any height, but his low kicks are something special (GIF). He keeps his leg very loose as he throws the strike, quickly slamming the snapping kick into his opponent’s thigh like a whip. It’s quick, damaging and quite difficult to catch. Before long, even standing up can become very challenging for his opponent (GIF).

Another staple of Cerrone’s kickboxing is the switch kick. He disguises the quick step well, usually hiding it behind a punch or, more often, a feint. Early on, Cerrone will use the switch kick to dig into the inside of his opponent’s lead leg, which quickens the destruction of that leg significantly. Then, Cerrone will change it up and go high with his switch kick, which has caught many of his past opponents (GIF).

Even with the addition of the snap kick/intercepting knee and better footwork, Cerrone’s defensive issues remain. The bottom line is that Cerrone is not a great boxer and avoids the pocket as a result. Unfortunately, each of his last four losses have come to slick boxers who applied smart pressure, which is undoubtedly the blueprint to defeating Cerrone even if it’s a tricky one to employ.

In addition, Southpaw opponents make Cerrone’s life more difficult. It does open up his right kick more often, but it’s much easier for a lesser Southpaw kicker to match his efforts with their own power kick. Meanwhile, Cerrone’s switch kick — a big foundation for much of his success — is far less helpful. Lastly, the man with crispest, straightest cross is at a much bigger advantage in Southpaw-Orthodox exchanges, and that man is usually not “Cowboy.”

Cerrone’s wrestling is definitely an under-appreciated skill. It’s been many years since a fighter found consistent success in dragging Cerrone to the mat and holding him down — once considered the blueprint to beating Cerrone in the World Extreme Cagefighting (WEC) days — whereas “Cowboy” has been double legging foes more actively each year.

Cerrone, like many tall strikers with strong distance control, likes to utilize the high double leg. When Cerrone takes the shot, he drives through his opponent in a combination of a double leg takedown and body lock. It’s a great technique for MMA even if it’s not classic wrestling, as it’s rather difficult to defend, as a full sprawl can simply give Cerrone an easy shuck to the back clinch. That said, it’s imperative that this type of shot be timed properly, as it will otherwise leave him in poor position.

In addition, Cerrone is skilled in the clinch with a variety of takedowns. Though it’s less common now that he prefers to shoot, Cerrrone has looked for Muay Thai style dumps from the double-collar tie in the past and will occasionally look to land trips from the body lock as well.

Cerrone’s takedown defense has improved significantly since the WEC days. Outside of his loss to dos Anjos back in 2013, he’s had little trouble staying on his feet in the cage regardless of division. Even in that defeat, his foe was only able to win a single round via takedowns. His distance control is obviously a major part of this, as getting close to him is difficult. Plus, the step knee is a great deterrent as well, as a poorly set up shot could have his opponent run face-first into the knee.

Aside from all that, Cerrone is simply good at defending the shot. He keeps a wide base, balances well, and fights for underhooks only until he can rip off elbows or knees of his own. Cardio is also a factor, as Cerrone’s excellent conditioning means he tends to defend the shot in round two and three even if his foe managed to score an early double leg. A great example of this came opposite Rick Story. Early in the fight, the two traded takedowns and brief top control, but as the fight wore on, Story came nowhere close to putting Cerrone on his back.

With an impressive 17 victories via submission, Cerrone has proven both his killer instinct and technical ability. After stunning an opponent, Cerrone immediately looks to jump on him with a submission.

Usually, Cerrone immediately looks to hop onto his opponent’s back and sneak his forearm around the neck for a rear-naked choke. The benefit of looking for the choke to finish is simple: if the rocked fighter leaves a single opening in his frazzled mental state for Cerrone’s arm to slip through, the fight is over. His mental toughness and durability no longer matter, as it’s simply impossible to “tough out” a sunk in rear-naked choke (GIF).

From his back, Cerrone is very good at fully utilizing his length. While pushing at his opponent’s hips, Cerrone is constantly looking to push an arm through for a triangle, swivel his hips for an armbar, or overhook one of his opponent’s arms to attack with the omoplata. Once he attacks with one of these submissions, Cerrone is excellent at transitioning between them.

Cerrone’s most recent submission win came opposite Mike Perry, a slick armbar that really showed Cerrone’s potency from his back. As Perry focused on elbowing Cerrone, he neglected to watch his arm position, extending too far past Cerrone’s waist. In addition, Perry’s weight was too far above Cerrone’s chest, which freed up Cerrone’s hips to move. Cerrone trapped the over-extended arm and quickly rotated his hips, locking in the armbar so quickly that Perry never really had a chance to correct those positional mistakes (GIF).

Going back a few years further, Cerrone’s fight with Evan Dunham was an extremely impressive display of his grappling, largely because Dunham has excellent jiu-jitsu and is rarely out-grappled. After being swept by Dunham’s deep half guard, Cerrone flowed with the transition, trapping Dunham’s arm in an omoplata. Dunham only held top position for a couple seconds, as he was quickly rolled by the shoulder lock.

In similar fashion, Cerrone reversed Myles Jury immediately after being taken down.

In the second round of his bout with Dunham, a similar exchange occurred. Once again, Dunham hit a beautiful deep half guard sweep. As he looked to come up into guard, Cerrone attacked with a triangle, which Dunham shook off. However, when he pulled out of the submission, he created a lot of space. Not wanting Cerrone to return to his feet and continue kicking the hell out of his legs, Dunham recklessly pushed into Cerrone’s guard.

As Dunham moved in, Cerrone caught one of his arms and pushed it through his legs. Having trapped him in a triangle, Cerrone smoothly grabbed one of Dunham’s legs, adjusted his angle, and rolled him over to end the bout (GIF).

At this point, we know what Donald Cerrone brings to the table. He’s still among the best in the world at Lightweight, a stiff test for just about anyone at 155 pounds. That number includes Justin Gaethje, and it’s rather easy to visualize how either man wins this bout: Gaethje by pressuring Cerrone and landing a bomb, while it’s very possible that “Cowboy” slows his opponent with kicks and intercepting blows then takes over. Which man will better implement his strategy is the question, and it’s going to be fun to watch the answer unfold.

Remember that MMAmania.com will deliver LIVE round-by-round, blow-by-blow coverage of the entire UFC Fight Night 158 fight card this weekend right HERE, starting with the ESPN+“Prelims” that are scheduled to begin at 5 p.m. ET, then the main card portion that will stream on ESPN+ at 8 p.m. ET.

To check out the latest and greatest UFC Fight Night 158: “Cowboy vs. Gaethje” news and notes be sure to hit up our comprehensive event archive right here.

Andrew Richardson, a Brazilian jiu-jitsu brown belt, is a professional fighter who trains at Team Alpha Male in Sacramento, California. In addition to learning alongside world-class talent, Andrew has scouted opponents and developed winning strategies for several of the sport’s most elite fighters.