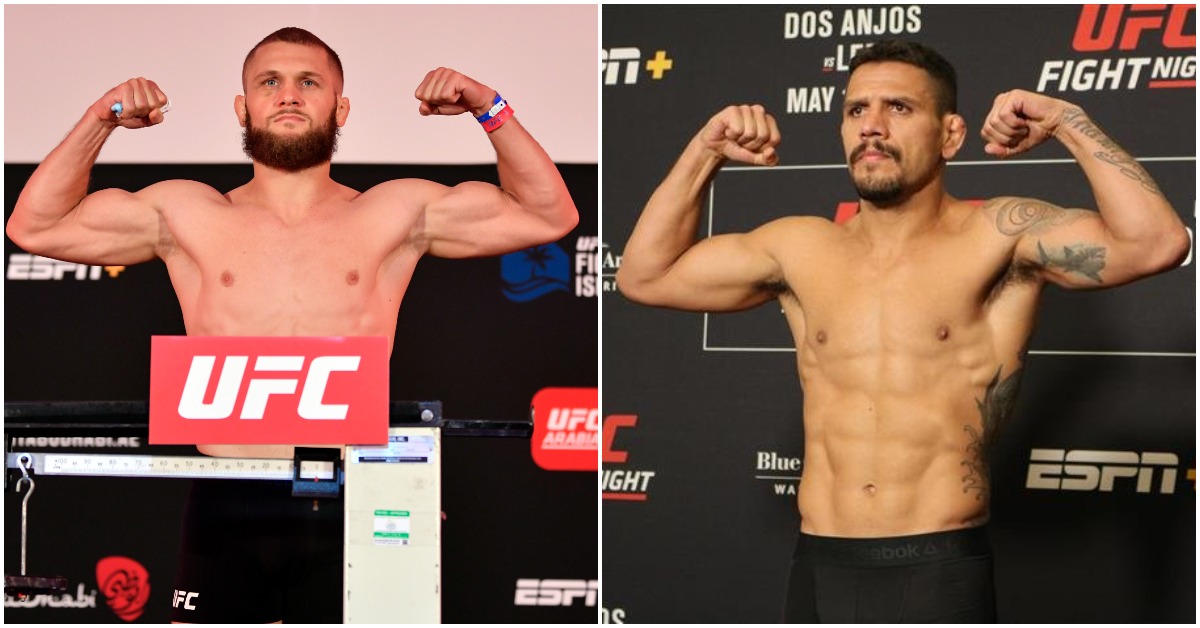 Rafael Fiziev is set to face former UFC lightweight champion Rafael do Anjos at the February 19th Fight Night card as the main event per MMA Fighting. According to sources close to the UFC, a matchup has been agreed between Fiziev and dos Anjos for a five-round fight although contracts have not been signed. The […]

According to sources close to the UFC, a matchup has been agreed between Fiziev and dos Anjos for a five-round fight although contracts have not been signed. The bout would take place at the UFC APEX in Las Vegas with the undercard yet to be announced.

This announcement follows a small social media back and forth just a few days prior, where Fiziev would call out the Brazilian.

The Background Of Rafael Fiziev and Rafael dos Anjos

Fiziev is currently considered one of the UFC’s brightest prospects following a five-fight win streak since late 2019. The Azerbaijani-Kyrgyzstan fighter bumped his stock up massively in 2021 with a win over Bobby Green in a fight of the year contender and a wheel kick KO over Brad Riddell. Fiziev also gained popularity with his post fight call outs of social media star Hasbulla and actor Vince Vaugh.

If the bout is to take place, dos Anjos would be ending a 15-month layoff following a split decision win over Paul Felder, although he was scheduled to face Islam Makhachev at UFC 267. Before this, dos Anjos had gone 1-4 in his previous five at welterweight but the long-time UFC veteran is still a tough test for anyone performing well in his last bout at lightweight. Although dos Anjos is coming to the tail end of his career, he will hold mountains of experience of Fieziev, holding wins over the likes of Nate Diaz, Anthony Pettis and Robbie Lawler.

What do you think? is it too soon For Rafael Fiziev to face the likes of Rafael dos Anjos?

The fight is scheduled to headline a UFC “Fight Night” card from the UFC APEX in Las Vegas, Nevada, USA, pe…

The fight is scheduled to headline a UFC “Fight Night” card from the UFC APEX in Las Vegas, Nevada, USA, per a recent report by Brett Okamoto of ESPN.

The booking could provide Fiziev with a test, going into the fourth and fifth rounds of a fight for the first time as a pro. It can also give him a chance to leap numerous spots up the busy and competitive lightweight rankings. He is currently positioned at #11 in the weight class and is set to take on dos Anjos, who is up at #6.

Fiziev is currently on a strong run up the lightweight division. He has attained five consecutive wins in the weight class, including two victories from last year.

Fiziev joined the UFC roster in 2019. While he lost his UFC debut to Magomed Mustafaev, that bout continues to be his sole loss as a pro.

dos Anjos will be returning for his first bout since late 2020. He snapped a two-fight skid in his last outing, defeating short-notice opponent Paul Felder via split decision. He was previously scheduled to face Islam Makhachev on that date, but an injury stopped the fight from happening.

UFC attempted to make a fight between dos Anjos and Makhachev again this year, but that time an injury to dos Anjos took the fight off the schedule.

Do you see Rafael dos Anjos stopping the momentum of Rafael Fiziev? 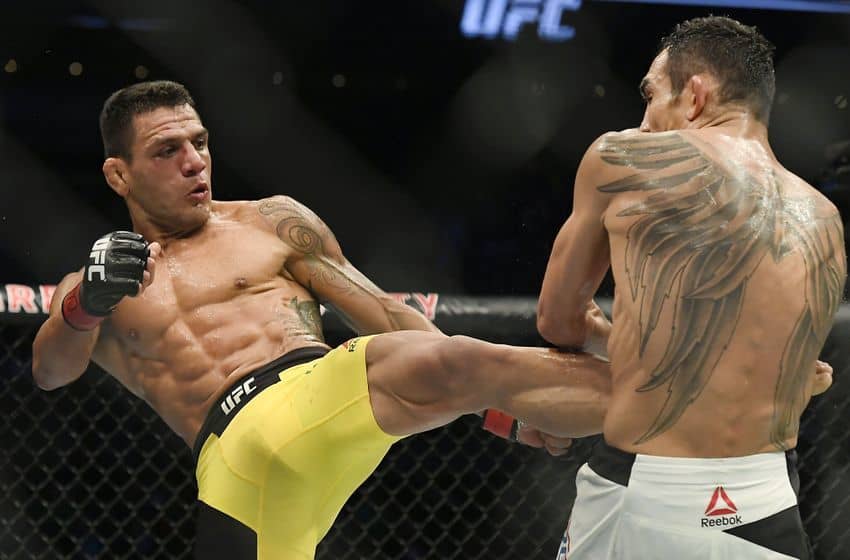 Rafael dos Anjos is looking for a fight and has set his sights on Tony Ferguson. Dos Anjos was initially slated to fight Islam Makhachev at UFC 267 in October. However, the former champion had to pull out of the fight due to injury as he required surgery at the time. However, “RDA” is now […]

Rafael dos Anjos is looking for a fight and has set his sights on Tony Ferguson.

Dos Anjos was initially slated to fight Islam Makhachev at UFC 267 in October. However, the former champion had to pull out of the fight due to injury as he required surgery at the time.

However, “RDA” is now seemingly ready to return to action as he called out Ferguson for a February fight on Saturday.

“@TonyFergusonXT do you have plans for February 19? I gave @ufc green light on my end.”

“Ahhh Hahhhhhh A Fellow Chucka’ Let Me Check With My Secretary

Of course, Dos Anjos and Ferguson fought all the way back in 2016 in their UFC Mexico City headliner.

Despite it being competitive, it was a clear Ferguson win in the end who outpointed Dos Anjos over five rounds to earn the unanimous decision victory.

A lot has happened since then, but a rematch between the pair certainly wouldn’t hurt at this stage.

Do you want to see Tony Ferguson and Rafael dos Anjos run things back?

Rafael dos Anjos and Islam Makhachev are back at it once again, throwing insults back and forth.

dos Anjos and Makhachev have been on the docket to fight each other on multiple occasions, with the fight falling through each time for various reasons…

Rafael dos Anjos and Islam Makhachev are back at it once again, throwing insults back and forth.

dos Anjos and Makhachev have been on the docket to fight each other on multiple occasions, with the fight falling through each time for various reasons. This has led to a beef between the two that has ebbed and flowed throughout the years, never ceasing to entertain.

The most recent of these interactions came when dos Anjos posted a clip of an altercation between he and Conor McGregor to Twitter, captioning it by saying that the Irishman was lucky that guards were between them. Makhachev chimed in by noting that there were no guards stopping RDA during that altercation.

“Let’s meet without security to break up the fight. See you in 2022,” dos Anjos wrote, directing his message to McGregor.

“There was no security around you man ?” Makhachev quipped.

This led to a fiery response from dos Anjos, who brought up the fact that Islam Makhachev has not faced any former champions and saying that he only has hype because of his close relationship with former lightweight champion Khabib Nurmagomedov.

In response, the Dagestani made the point that he was booked to fight RDA, but the Brazilian withdrew.

“How many champions have you fought? How many main events? You only getting the hype because of your brother, Get my name out of your dirty mouth Khabib wanna be,” dos Anjos said.

“Never fought champion, because you keep pulling out, unfortunately,” said Makhachev in response.

Finally, dos Anjos stated that Makhachev is lucky to not be facing him and that he must be his manager, Ali Abdelaziz’s favorite fighter. However, Makhachev countered this by somewhat sarcastically saying that this honor clearly belongs to Justin Gaethje, who appears to be getting the title shot over him while he instead faces Beneil Dariush.

This was an entertaining back-and-forth between Rafael dos Anjos and Islam Makhachev. While it is unclear if they will ever end up actually fighting, it is always entertaining to see them trading barbs online.

UFC commentator Daniel Cormier has gotten under the skin of some over his ‘Best MMA Boxers’ list, including Nate Diaz and Rafael dos Anjos.

UFC commentator Daniel Cormier has gotten under the skin of some over his ‘Best MMA Boxers’ list, including Nate Diaz and Rafael dos Anjos.

Cormier, along with his DC & RC co-host Ryan Clark, revealed their ‘Top MMA Boxers of All-Time’ lists earlier this week. This comes amidst the ongoing debate and conversation about who the best boxer in the UFC is today.

Cormier’s list was not well received by the MMA community as a whole, and more specifically his former fighting colleagues. Fighters such as UFC middleweight Eryk Anders and more recognized names such as Nate Diaz and Rafael dos Anjos blasted Cormier in an Instagram comment section.

Diaz was followed up by Dos Anjos, who took the opportunity to poke at Cormier for his alleged bias towards his former teammate Islam Makhachev and Khabib Nurmagomedov.

Daniel Cormier Has Been Accused Of Bias In The Past

This isn’t the first time that Cormier has been roasted for his opinions by UFC fighters. Since making the move from the Octagon to the broadcast booth, fighters such as Dos Anjos and former interim lightweight champion Justin Gaethje have come out and criticized Cormier for his alleged favoritism during commentary.

Cormier and Holloway, in particular, are known to have a close relationship outside of competition. He also was accused of not calling Makhachev’s recent win over Dan Hooker at UFC 267 in an objective manner.

Diaz and McGregor, one of the names on Cormier’s list, have had an infamous rivalry for years. It’s not a surprise to many that Diaz would have a problem with McGregor being included in a striking list and not himself.

Cormier remains one of the most prominent voices in MMA media today and will inevitably continue to ruffle the feathers of the fighters over time.

Do you agree with Daniel Cormier’s ‘Best MMA Boxer’ list? 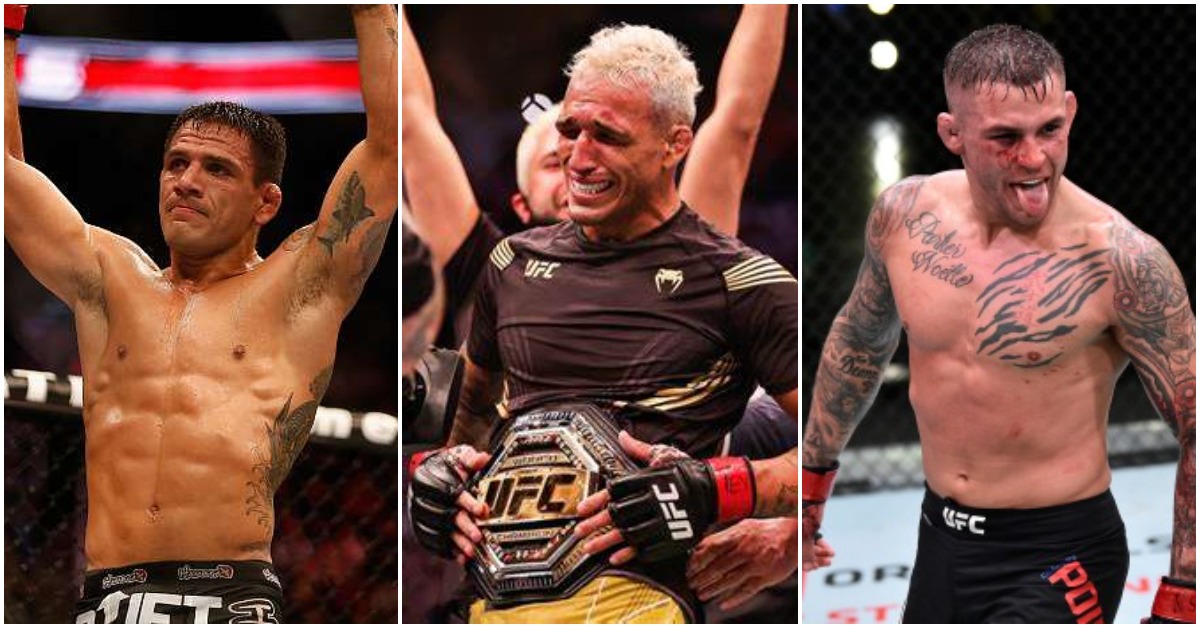 The former UFC lightweight champion Rafael dos Anjos backs his fellow countryman, Charles Oliveira in his first title defence against Dustin Poirier at UFC 269 on December 11th.  During an interview with RT Sport MMA, dos Anjos opened up about the landscape of the lightweight division. “I see Charles Oliveira finishing Dustin Poirier. If Charles […]

During an interview with RT Sport MMA, dos Anjos opened up about the landscape of the lightweight division.

“I see Charles Oliveira finishing Dustin Poirier. If Charles is trying to exchange with him, he has a chance of losing that fight; a little chance cause he can get caught. But Poirier is not very hard to take down. It’s not very hard to take Poirier down. And I think Charles is going to manage to take him down. They’re gonna scramble, and Charles is gonna finish him. Because we see in the past, his submission, his ground game skills are not on the high level. He’s a good fighter, good stand-up fighter, but he’s not very good on the ground.”

He also added that: “He got a good mindset right now. He’s coming back-to-back with a lot of wins, and it builds up your confidence. So, it’s good. I think Charles – with all due respect to Dustin – but he’s gonna go through him. I think Charles is gonna win; gonna keep the belt.”

Rafael dos Anjos is looking to fight again in either January or February, with him having to pull out of his highly anticipated matchup with prospect Islam Makhachev due to a knee injury.

The “Diamond” has had a taste of UFC gold, with Poirier becoming the interim lightweight champion after beating featherweight great Max Holloway in 2019.

However he was unable to unify the belt with the champion Khabib submitting him in the third round.

Poirier did bounce back winning a slug fest unanimous decision against Dan Hooker, then with back to back wins over the former lightweight and featherweight champion Conor Mcgregor the “Diamond” had solidified himself as the number one contender.

But standing in Dustin’s way of UFC greatest is the lightweight champion Charles Oliveira, who has the most submission wins in UFC history as well as, being on a nine fight win streak with win’s over former interim champion Tony Ferguson and former Bellator champion Michael Chandler.

Who do you think will win the UFC lightweight title?